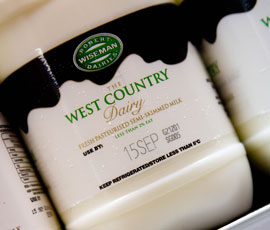 Dairy farmers have been dealt a devastating blow after Wiseman announced a 1.7p/litre reduction in the farmgate milk price, to take effect from August 1, 2012.

The company blamed the price cut on a collapse in the value of the cream in each litre of farmgate milk over the last 12 months.

From its peak, the commodity fell in value by the milk price equivalent of more than 5p/litre. (source DairyCo Datum)

Wiseman said it had hoped that the need for further adjustment to its milk price following a 2p/litre reduction, which took effect in June, could be negated by a sustained and significant rally of commodity market values.

But whilst markets have improved from the lows of recent weeks, they remain at levels not seen since early 2010, when the average DEFRA milk price in the UK was 24.19p/litre.

As a result, Wiseman’s standard litre price from August will be 24.73p/litre.

Pete Nicholson, milk procurement director at Robert Wiseman Dairies, said: “We know that this news will come as a major disappointment to Wiseman Milk Group members.

“We have done everything we can to minimise the reduction in our farm gate milk price but we must now reflect the substantially lower returns from the markets which we serve.”

Roddy Catto, acting chairman of the Wiseman Milk Partnership, added: “Many WMG members are still coming to terms with the 2p/litre cut in June and to be faced with a further 1.7p/litre cut will be devastating.

“We have done everything we can to minimise the reduction in our farm gate milk price but we must now reflect the substantially lower returns from the markets which we serve.”
Pete Nicholson

“The Wiseman Partnership Board put forward a very strong and justifiable case to keep the milk price as is. We have been unable to change the company position and as such we certainly do not give this move our approval.

“We will however continue to work with the Company to build a recovery back to milk prices that reflects a more sustainable position for our members at the earliest opportunity.”