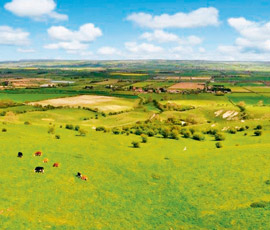 Farms that have long been in the same ownership are a feature of this spring market, which appears to be finally warming up along with the climate. A Yorkshire Wolds farm with almost 350 acres will be launched next week, after almost 100 years in the ownership of the Ireland family.

Manor Wold Farm originally formed part of the Sledmere Estate and is the first to be marketed in this sought-after farming area this year.

At East Heslerton, near Malton, it includes a traditional, south-facing four-bedroom farmhouse with modern and traditional farm buildings. About 210 acres are high-quality arable land; 132 acres are permanent pasture.

Part of the land has been entered into an option agreement for a wind turbine, which could generate extra income.

Also in Yorkshire, three smaller farms are being auctioned on behalf of North Yorkshire County Council on 29 May at Northallerton, each with a three-bedroom house and buildings.

Poplar Farm is the largest with just over 104 acres, also near Malton. With a detached house and farm buildings for a mixed grass and arable enterprise, it has an auction guide of £950,000.

Tunstall Road Farm at Catterick also includes useful buildings, on 78 acres of arable and grassland, and is guided at £900,000.

Tips on selling land for development