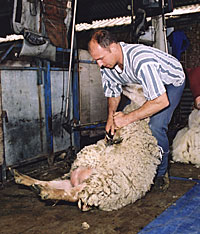 The British Wool Marketing Board has announced changes to the way it charges farmers for wool haulage this season.

As with the old system, charges will be split, with 40% taken off the advance wool payment and the rest deducted from the balance payment. No charge exists for wool delivered direct to a producer’s assigned depot or BWMB Intermediate Centre.

The BWMB’s Gareth Jones urged producers to pack their clip into fewer containers to reduce the cost of haulage and storage. He said the Board was working with an engineering company to develop a new on-farm packing machine. It is hoped the tractor-powered packer – which will also pack other farm waste such as plastic and cardboard – will be available for producers and shearers to buy in time for the start of the 2010 shearing season.