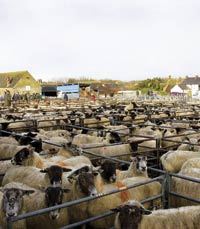 After ten years of consultation, the new livestock market, to be built alongside Roman road to the north of Hereford, will cover an area of 48 acres and will be able to hold 8000 sheep and 500 cattle. The access junction onto the main road is nearing completion and the new market will open its doors for business in spring next year.

This is an historic milestone not just for the city of Hereford, but the whole of the county, said Councillor Roger Phillips, at the official “cutting of the turf” last week.

“The current livestock market is poorly located on a dilapidated site in the centre of the city, has inadequate facilities for 21st century farming and has come to the end of its working life.

“The creation of the new livestock market is key to unlocking a huge area of land in Hereford’s city centre and safeguarding our important farming heritage and economy for the future. It’s taken us a number of years to get to this stage so I’m delighted that work is finally under way,” added Councillor Phillips.

Despite challenging economic conditions, the livestock market is experiencing strong trading. Herefordshire is traditionally a prime livestock area and its farming heritage includes the world famous Hereford cattle breed. Livestock farming supports 25% of the country’s landscape and agriculture makes up 7% of the local economy, as well as providing attractive pasture and a rural way of life that also supports a tourism industry of over £400 million a year.

The new market will contain a sheep ring and cattle ring, with loading docks, over 300 car or car and trailer parking spaces, an additional 44 articulated or trailer lorry parking and nine lorry wash stations. There will be offices, a café, welfare areas and toilets, with landscaped areas of decorative native trees, a wildflower meadow and wildlife conservation area. The new site is away from main settlements but has good transport links from around the county.

The scheme also includes improvements to the road network system around the site including cycle ways and footpaths.

The design of the market has been done in consultation with the National Farmers Union and Hereford Markets Auctioneers who are the main users of the development.

The council is also promoting farmers’ markets and is driving a campaign to put more local produce on menus and dinner plates across Herefordshire. The annual food festival in October will also reinforce the council’s view that the county’s future lies in safeguarding its farming heritage.