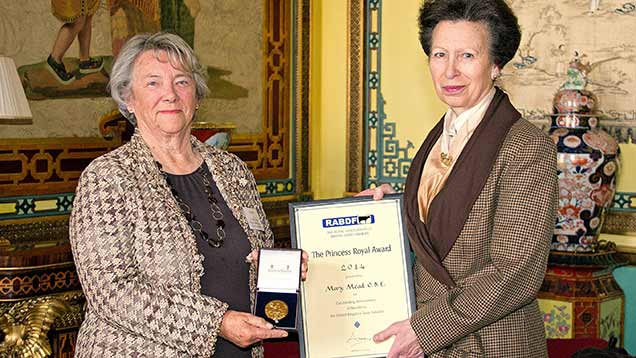 Mrs Mead, who oversees her family’s 1,400-acre farm near Blagdon, Somerset, and its 420-head Lakemead herd of British Friesians, picked up the award at Buckingham Palace on Thursday (30 April).

Her son Tim runs Yeo Valley, which employs 1,800 people and turns over more than £300m/year.

After winning the award, Mrs Mead spoke on the state of the industry, her hopes for the future and her favourite breed.

On the milk price crisis…

We are in such a state of flux at the moment. It has come upon people as a surprise because they have been encouraged to produce more.

People seem to have jumped in without knowing who has purchased the milk or what was required.

On what conventional milk can learn from the organic market, where supply is managed and high-value brands have been created…

We said: “What do we do to differentiate ourselves?” I think we will see that happening with conventional milk.

If we can deliver a high-value milk that commands a higher price, the supermarkets also like it because they can take a bigger margin.

What we do with organic, it is about long-term, sustainable collaboration for the future.

On what changes she’d make to the industry…

We need an independent producer organisation which targets market information and coordinates farmers.

There is market information that is coming out from people like Rabobank and DIN but there needs to be a one-stop shop that could anticipate increases in production.

Farmers need an independent organisation to do that.

On working with nature in dairy farming…

We are not really working long-term or sustainable as an industry.

But farming chemically, as we have done since the Second World War, is beginning to run its course. People are looking to address the soils again and the nutrition.

Absolutely on the way up. It is bred to be a grazing animal.

The fertility is much better than a Holstein, you have the higher constituents so higher [milk] value, and you have got the longevity, which gives you lower replacement costs.