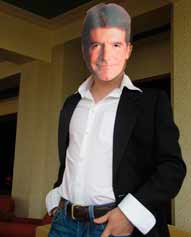 FW enlisted the help of Simon Cowell (OK, it was arable reporter James Andrews in a Simon Cowell mask) to give us his take on the drama final at the Young Farmers agm in Torquay.

The official judges named the performers from Berriew as winners, with 18-year-old Craig Pearce taking home the best actor award for his performance.

Simon (or, rather, James) would have named a different team winners. Here’s his view…

Buxton YFC, Derbyshire gave a top comic performance in their production, Close Relations, based on a hill farm bed-and-breakfast.

An average day unfolds into something a little more bizarre when farmer Roger Smith, played by Danny Newton, discovers a conquest from the Torquay agm 20 years previously is coming to stay.

Berriew’s performance Odd Ball follows budding footballer Danny as he is diagnosed with testicular cancer. His life starts to fall apart as he begins treatment, but as his recovery progresses it starts to get back on track.

Craig Pearce, 18, who played the role, gave a convincing performance, as did actor Lloyd Bright who played his best friend Scott.

Verdict: Top performances from all cast members, even if it was a tad heavy going for a Sunday afternoon.

Line manager, Mr Spratt, played by Richard Rowe, struggles to keep control of his wayward staff as they bake a special cake ready for a royal visit.

Verdict: Some good performances, but there were moments when the plot was slightly weak.

* Get all the news, pictures and videos from event on our special Young Farmers report page.