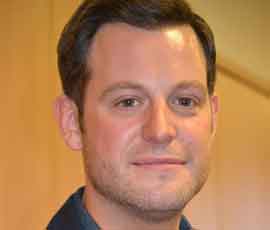 Countryfile host Matt Baker has pledged to do more to raise the profile of Young Farmers.

Entering his second year as the president of the National Federation of Young Farmers Clubs’ The One Show presenter said he would do more to promote the organisation.

The 34-year-old former Strictly Come Dancing contestant promised not to let his BBC bosses’ rules on its stars remaining impartial prevent him from making the British public more aware of the good work the next generation of Britain’s farmers are doing.

Speaking to Farmers Weekly at the Young Farmers AGM 2012 in Torquay, Devon, Matt said: “I know that with Countryfile we get enormous viewing figures up to nine million and I think there’s definitely more scope [to promote Young Farmers]. I think we can drop in the phrase young farmers in a little bit more.

“And I know it’s very difficult with the BBC… because of organisations and showing bias, but we could do that a little bit more, I think.”

The married dad-of-two who grew up on his family’s County Durham sheep farm said it was vital to encourage more young people into the industry particularly as the next generation seemed to show the greatest understanding of farming as a global industry.

The ex-Blue Peter presenter said: “Farmers have to be so adaptable to what’s going on with issues all around the world, like imports and different climates, and the young farmers that are here are so on it. They are going to drive us forward there’s no doubt about it.”

“I think the phrase that came out of the forum was that some older farmers maybe need to step aside and let the new generation come through,” he said.

Despite being coy when it came to discussing earlier comments attacking wind farms for ruining Britain’s countryside, Matt said it was vital the industry proved its green credentials.

The star, who received a warm welcome from fans on the streets of Torquay, also said he had no problem with being labelled a farming heart-throb as it showed he was being successful in raising awareness about rural issues.

“It’s lovely to meet the people that see you on television and get in contact with you. It started with Blue Peter as soon as you go out and start meeting your audience you realise you are doing a job that has a reaction and that’s lovely. That’s why we do what we do really, bring stories and rural issues to the people, and if that’s working then that’s great news.”