Modern agriculture is cutting edge and business focused – perfect for an aspiring salesperson, regardless of their background, as one politics grad found when he became a grain trader.

Graham Hatton admits he couldn’t have identified a pile of oilseed rape from a pile of wheat before he started working in the agricultural industry, but that hasn’t held him back.

The politics graduate had never even considered a career in the sector until a friend at Harper Adams University forwarded him a link to a job with grain company Gleadell. 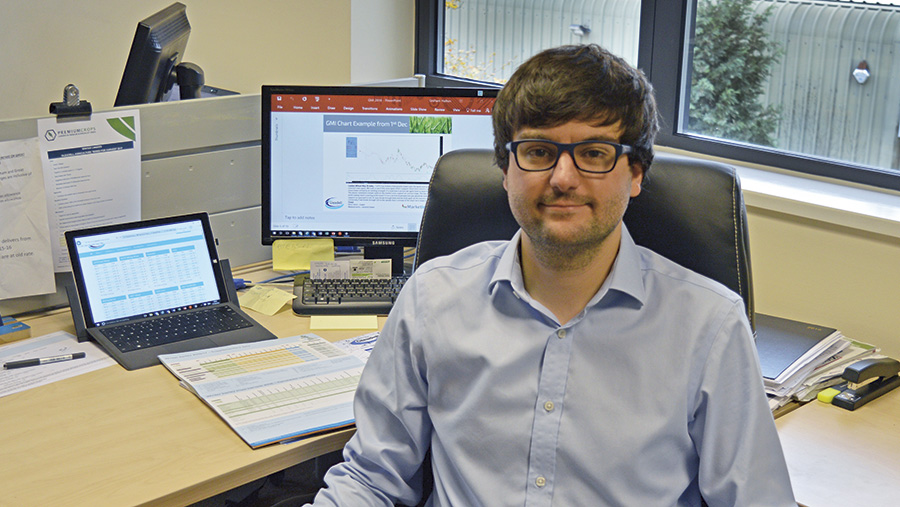 At the time he was working as a car salesman after struggling to secure a place on a graduate trainee course as companies tightened their belts in the wake of the 2008 recession.

Told that his chances would be improved if he got more experience, he took a job with a Volkswagen franchise. But he knew it was something that he did not want to do long term.

So the email advertising for a graduate trainee trader immediately caught his eye.

“I was the only applicant without a farming background and I had pretty limited knowledge about agriculture, but I knew I could learn.

“I applied speculatively and got the job.”

Today, Graham, 28, is regional manager for Gleadell based in York, where he oversees a team of six farm traders and manages a ledger of his own accounts buying grain and selling seed and fertiliser to farms.

He was appointed to the job in the summer of 2015 after five years trading grain for the company in the West Midlands and the North West.

The job is fast-paced, varied and that’s the way he likes it.

“Agriculture is all about relationships and I like that side of things. I also like the challenge of securing a deal. In our business you might ring up someone who has traded with a certain individual for 20 years or more – so to secure some business with that person gives you a sense of achievement.”

To help give him the tools that he needs to do the job, Graham was sent grain sampling for three months, spent time on a farm helping on the store intake and was supported through a variety of courses including Facts.

He was also assigned a good mentor.

But he also had to be self-motivated in terms of learning as much as he could about the industry as quickly as possible.

“If I wasn’t spending time talking to farmers, I was reading the farming press or relevant papers online.

“Before that, I don’t think I appreciated how sophisticated modern agriculture is and how business driven it is.”

However, the fact he isn’t from a farming background may actually have been beneficial, he says.

“Because in some ways I was a bit different it meant that customers tended to remember me. You have to differentiate yourself and it did that for me.”

Compared with his contemporaries from Lancaster University he says his salary and conditions are good.

“I’m probably ahead of many of my peers in that respect. I’ve been fortunate with the company I work for and the opportunities they have offered me.

“It is a rewarding job, although I do think you need to be self-motivated, hungry and willing to learn. My hours are 8am to 5.30pm but I tend to be contactable most of the time. However, that’s something I choose to do.

“I would definitely recommend it as a career. There are a lot of opportunities and there will more in the future.”