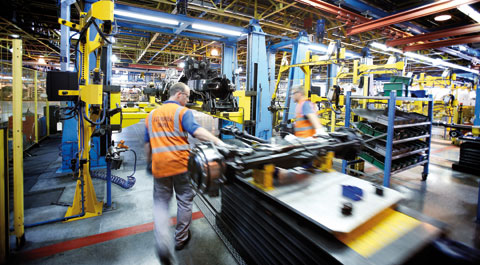 Ever wondered what it’s like to work on a tractor production line? David Cousins donned a set of astonishingly crisp overalls to spend a day on the New Holland line at Basildon, Essex

What do you think about when you’re on a tractor? The job itself, of course, and how well or badly it’s going. Whether you can get the field finished before the rain, maybe, or what you’re going to say to the bank manager when you meet him in the afternoon.

Or, more urgently, how long you can hold out before you snaffle the ham and mustard sandwich that’s been quietly calling to you from behind the seat.

But what you almost certainly have never thought about – not even once – is the people who actually built the tractor you’re driving. Were they young or old? Were they having a good day, with a lot of jokes being cracked? And what’s it like working in a tractor factory anyway?

There was only one way to answer this last question and that was to go and visit one. Twenty years ago, you would have had a choice of four UK tractor plants to visit – Ford in Essex, JCB in Staffordshire, Massey Ferguson in Coventry and Case IH in Doncaster. Now there’s just JCB and New Holland, with the latter by far the bigger maker in terms of tractor production. So, for us, it was a case of The Only Way Is Essex. 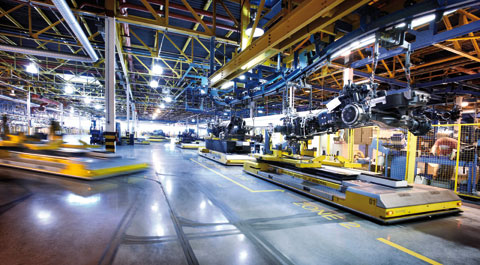 The single shift at the NH plant runs from 6.45am to 3.45pm. Time, tide and production lines wait for no man, so I was told to be there sharpish.

Basildon’s a great place, I’ve no doubt. But at 6.15am on a pitch-black, frosty midwinter day the huge car park and enormous buildings made it feel like your first day at school.

However things start to look up as I shuffle into the amazingly warm reception hut with its chatty, hi-visibility receptionist. Security here is pretty tight, so I’m escorted into the plant by a security man.

The first task is the health and safety debrief, a standard feature of any factory induction these days, whether it makes tractors, dog biscuits or chocolate eclairs.

Shaun, one of several health and safety men at Basildon, was very friendly but it was clear that I would be shown the door if I transgressed.

He has a point though. He’s been working at the plant for 30 years, he explained, and remembers the days when the work environment was not as safe as it is today.

What’s prompted the improvement? In the 1970s and 1980s gangs of workers in factories like this would routinely manhandle massively heavy components, so back and shoulder injuries were common. Now, electric hoists and other mechanical ways of moving metal around the plant have made a huge difference to the health of workers.

It’s still a physical job, of course, but the increasing use of only-one-way-to-fit-it components has almost eliminated the mis-threadings and other errors that used to pose such a danger to life and limb.

It’s all about Poke Yoka, Shaun said knowingly. I assumed it was something special we’d be eating at lunch, but it’s actually a Japanese term that means making an operation foolproof.

In fact Poke Yoka is key tool within World Class Manufacturing. WCM is based upon a system of manufacturing that was developed by Toyota in the 1970s and is still having a huge influence on the way factories all over the world work, even now.

At its core WCM is a complex mix of production systems, philosophy and logic but, basically, it means that rather than walking several miles a day to pick up components before assembling them, workers on the line have all the parts brought to them.

The result was a huge jump in productivity and much less leg-ache for workers. Simples, as those dratted Meerkats would say.

There’s another Japanese word I hear several times around the factory – Kaizen. It translates as ‘continuous improvement’, a quality that your old headmaster might well have looked for in you but rarely found. 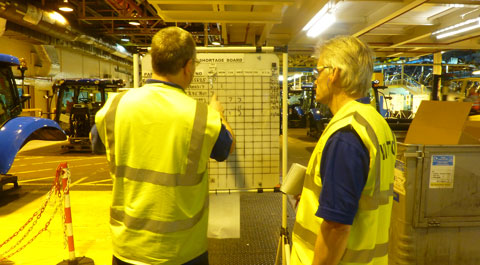 Kitted out with safety boots, earplugs and the crispest set of overalls in eastern England, I’m ushered into the main production hall.

If you’ve never visited a modern tractor plant before, it can be a bit of shock. You expect a dark, noisy, acrid-smelling place that Brunel would have approved of.

In actual fact, modern manufacturing NH-style involves a warm, light and surprisingly quiet workplace. It’s a huge area, of course, and seems to stretch to the horizon giving work to 1000 employees.

Robotic carts may whizz back and forth with heavy components like engines and drivetrains, but the manned production line is still the queen bee in this hive of activity.

Ready for some juicy stats? Technical Co-ordinator (and, coincidentally, drummer in the Basildon rock band White Onion) John Williams has them all off pat. The production line at Basildon is just over 2 kms long and it takes 1.75 days for a fledgling tractor to make its way from one end to the other, he says.

John started working here in the eighties, back in the days when the plant was building Ford 10 Series tractors. A typical pay rate back then was about £3.50/hour, he says, and his father-in- law (who already worked at Basildon) got him an application form.

What skills do you need to have before you can work on a production line, I wondered? “People applying for jobs here may not have much actual manufacturing experience, but they often have good mechanical skills,” he says.

Everyone goes through a course on using the basic tools, of course, as well as being trained on more complex things like hoists. But a lot of it is about pride in your job – ensuring that you don’t cross-thread nuts and screws and that you get torque settings exactly right. 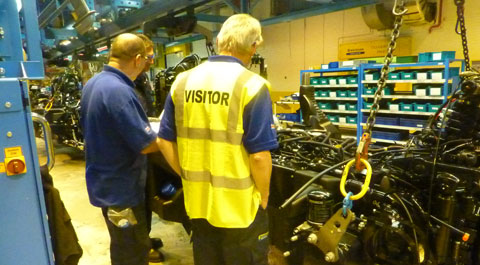 With my training completed in double-quick time, I join Matty and Pete on the curiously-named Cab Line Buy Off. I’m not actually allowed to bolt, rivet or screw anything to anything else (would you want your tractor put together by a journalist?) but I get a good chance to watch others doing it at close quarters.

Matty and Pete have a slightly unusual job of not assembling tractors but ensuring that the quality meets the high demands of the customer.

Whatever the problem, the guys seem pretty calm about getting it sorted, even though the line keeps moving. I’d be panicking by now…

Most tractors coming down the line are blue New Holland ones. There’s some dark-red Cases, (destined for the American and Asian markets not Europe), and even a bronze tractor produced recently to celebrate New Holland’s World Class Manufacturing Award. On top of this, the plant was also named UK Manufacturer of the Year.

US models with black fenders and white roofs also pass down the line and it’s not unknown to see the occasional one painted in a special paint for the more selective customer.

Is it a pleasant place to work? Well, it can seem a bit relentless, of course, but there’s plenty of laughter and joshing and the guys on the line seem a cheerful bunch.

There’s a slight lull in the proceedings so Matty takes me along the cab production line in the opposite direction to that of the tractors. This is an odd sensation, not unlike watching a strip tease show. You start off looking at almost-completed tractors and gradually see them losing their parts and panels.

Eventually you come to the guys whose job it is to fit the wiring loom into an otherwise bare metal cab. Forget the slender pack of wires that used to be required in a tractor – the huge increase in equipment and technical wizardry means that wiring looms are now so fat you’d struggle to get your two outstretched thumbs and forefingers around them.

Lunchtime. The canteen at Basildon obviously embraces the best Kaizen-style production-line principles too.

How, otherwise, could it cope with a thousand or so workers sweeping in at bang on 1pm, wolfing down a hot meal and leaving at 1.28pm?

For the afternoon stint, I work with Wayne and Barry. Wayne has worked here for 18 years and Barry for 20. I’m handed a scanner to scan bar codes on various engine components. It’s important to make sure you don’t miss any, says Barry, and he watches me carefully as I do it.

The move to lean manufacturing has made a huge difference to the job over the years, he says, with much less walking about. Also, the factory used to be filled with cardboard boxes full of components in the past – that’s all gone now.

My stint over, I hand back the still-stiff overalls and head back out into the chilly car park. I may not have actually assembled a tractor but I’ve been amazed at the complexity of modern tractor production and the effort and human ingenuity that has been brought to the process.

Modern tractors are expensive tools to buy, but when you see what goes in to them you do get some idea of why they cost what they do.

I’ve also been impressed with the good humour and friendliness of the workers on the line and the extent to which tractor making is a truly family affair in this part of south Essex. Given that tractor manufacturing in the UK – certainly in terms of numbers built – is a pale shadow of what it used to be, we should treasure this little corner of Essex.