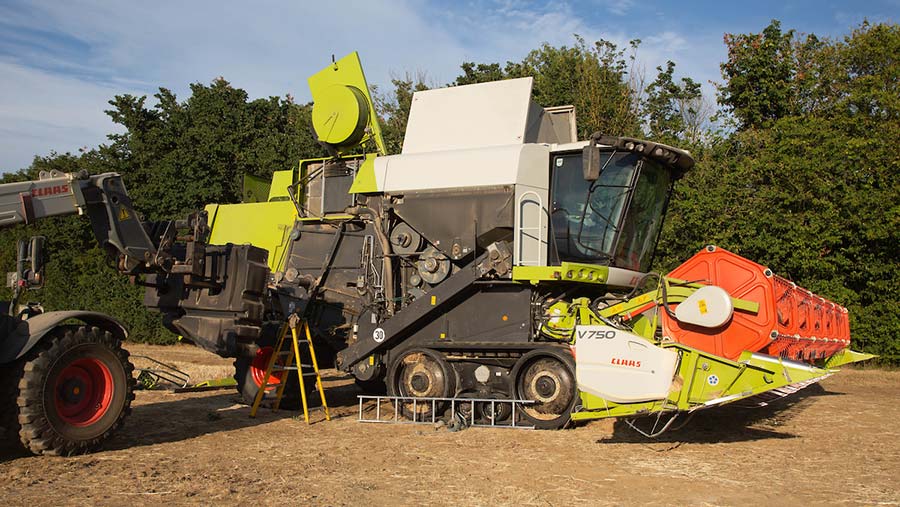 We all need someone to get us out of a pickle now and then and if you’re an arable farmer with a combine that’s just expired?

It’s the uplifting sight of the dealer mechanic’s van bumping across the stubble towards his broken-down machine.

Back in the days when farms and combines were smaller, many farmers would tackle a breakdown themselves.

But with one big combine now sometimes asked to cut 3000 acres of crop a year, anything major is going to be a job for the mechanic at the local dealer.

Let’s get one thing clear. All combines break down at some point or other, irrespective of make and age. All combines have little accidents, too (a thumped discharge auger here, an indigestible bicycle there).

See also: Job profile: What’s it like to be a tractor sales instructor?

So for most farmers, it’s probably the quality of the dealer’s harvest breakdown cover that is likely to be the most important factor when they come to choose the colour of their next combine.

But what’s it like being the round-the-clock, open-all-hours stalwart who comes to your aid?

To find out, we went to the Benington branch of Ernest Doe and Sons. Although the depot nestles in a chocolate-box village in Hertfordshire, it’s one of the busiest of New Holland’s combine outlets.

But it was Steve who drew the short straw and had to put up with the Farmers Weekly journalist asking fatuous questions and kicking spanners off the top of combines (sorry, Steve).

The day chosen was 31 August. Normally most of the wheat in this neck of the woods would have been safely in the barn by now, but 10 days of drizzle meant there was a lot of corn out there gently going black.

The weather forecast was perky, but farmers were getting anxious and combines were being pushed to the limit. 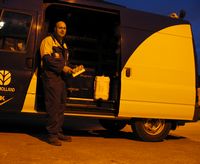 Steve is loading up the van as I arrive in the yard. There’s time for a gulped-down mug of tea, then we’re off to the first farm.

There are a couple of small combine repairs on the agenda for today, plus servicing an excavator (Steve is also a trained construction equipment mechanic), but I suspect the mobile phone nestling on the van’s dashboard could soon make mincemeat of our plans.

Is this unearthly starting-time normal for him? Yes it is, he says, in fact from the first week in July to the first week of September he works prodigious numbers of hours, getting up at 4am and generally finishing at 9 or 10pm.

We’ve driven for 45 minutes along darkened Hertfordshire lanes to a farm south of Milton Keynes.

Two combines stand in one 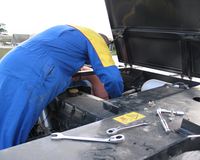 corner of a field, one a New Holland, the other a Claas. Both

broke down the day before, which seems a bit unlucky.

The wiring loom that runs to the top of the injectors on the New Holland has had to be replaced because oil has seeped into the plug and made one cylinder cut out.

There were no replacement parts in the UK so a man from the Iveco engine factory in Turin brought it over in his car last night, dropped it off and drove straight back again, a mere 25hr round trip.

Is this normal, I wondered? Steve nods. He has been doing this job for 17 years and has seen how manufacturers generally have cut down the number of parts held in the UK in favour of big centralised parts centres in Europe.

That might sound a little worrying, if it were not for the fact that the systems for getting parts here quickly have become very efficient.

New Holland, for one, undertakes to repair combines less than three years old within 24 hours, whatever it takes. Hence the long-haul Italian.

Anyhow, Steve fits the new wiring loom, runs the engine and that’s job number one done. Though, little does he know it, but he’ll be back here again before the day is done.

We’re back in the van heading off to the next job, which is a misbehaving idler sprocket on one end of the header.

The mobile hasn’t rung yet but, with about 50 combines on Steve’s beat and 90% of the owners in possession of his mobile phone number, you sense it won’t be long.

I’m intrigued by the strange round-the-clock life that Steve and other harvest mechanics live at this time of the year, too. “Perhaps we make a rod for our own backs.

The mobile is switched on 24 hours a day, all year round, so anyone can get us,” he says.

“Often the calls will be just for advice, but they can happen at any time of the day or night. I was once phoned at 2am by someone combining beans who had wrapped them around the top elevator shaft. I had to split the chain and put on new anti-wrap guards, and I finished at 4.30am.”

Sometimes, after a night repair job, it’s not worth going home, but Steve always makes sure he has a nap before driving again.

It makes for a bit of a chaotic home life in summer, but Steve’s wife Lisa and children Jack (5) and Jessica (18 months) are used to it. The overtime payments come in handy too, he admits.

The phone has woken up. Some farmers have obviously had problems last night and left it to this morning to call in for advice on what to do.

I’m surprised at how angry some of them are – there’s some choice language on display – but Steve reckons that’s a guide to how much more stressful harvest is now than in the past.

He has the reassuring manner of a doctor or an aircraft pilot, listening to farmers’ woes and providing calm, practical advice. Callers start off in a bit of a lather, but invariably ring off with a cheery “Thanks mate”. 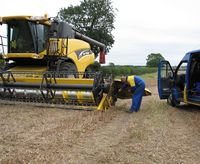 We’ve only just arrived at the second job, just down the road from Benington, which shows how much time is spent travelling.

One of the chains on the side of the header has become so worn it’s bent the idler arm, but there’s one at the depot so the whole repair is about as quick as they come.

While Steve is fetching the part, I quiz service manager Rob Freestone about this parts business.

It turns out that this particular branch of Ernest Doe’s is big (and busy) enough to warrant stocking a lot of parts that other dealers fight shy of.

It even has a pair of rotors for a New Holland CR combine in stock, which at £7000 a piece must bring a tear to the eye of a company accountant somewhere.

They even have a new combine delivered each year specifically for cannibalising for unusual parts. 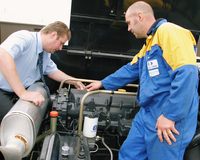 We’re on the road again and the calls from service manager Rob keep coming.

One farmer combining beans (a crop that requires the knife to be very close to the ground) has called in to ask why one side of the table seems lower than the other.

Steve deliberates for a while, then suggests latching the skids up. The farmer sounds reassured. 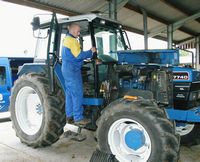 There’s just time to whiz over to Sandon to sort out a Ford 7740 with a multi-vee belt that’s broken.

Except that it isn’t broken and has flipped off as a result of water leaking through the water pump seal.

A new pump is needed luckily the stores have one so, after a quick chat with Rob, he books to fit it the following day.

Back on the road, Steve gets a call from a farmer-contractor with a knife-head bearing about to expire.

He cuts 9000 acres a year, so he’s understandably anxious about any potential stoppages. But Steve is able to reassure him that there’s one in the store so he rings off happy. 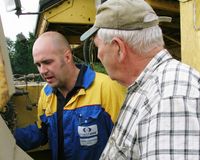 Father and son Scott and David McLellan have called to say that they’ve got a problem with the reverser mechanism on their well-used but normally reliable 8070 combine.

They’ve done a temporary repair to keep them going but the whole unit’s getting worryingly hot.

A couple of calls establish that the parts needed are residing at other Ernest Doe branches, but the sprocket is no longer made.

There’s a surprise call from New Holland themselves. They have a tracked skidsteer loader that’s just been dropped off at the Saltex groundscare and landscaping exhibition site at Windsor, but refuses to start.

It sounds urgent (and potentially a bit embarrassing) so we set off on what should be an hour and a half drive.

Twenty minutes later we’re stuck in the inevitable jam on the M25. “This where we need a blue-and-yellow helicopter,” jokes Steve.

Meanwhile the phone has brought worrying news. The combine he thought he’d fixed at 6.30 this morning ran for a bit, then died on the driver and now won’t start at all.

Steve and Rob do a quick bit of re-prioritising. They agree that this is clearly the most urgent job now so we dive off the useless motorway and head back the way we came.

More information is coming in on the non starting-combine. It won’t crank fast enough to start, so it looks like the gearbox will have to come off to check what the problem is.

Brian, the other mechanic, is down there already and sounds a bit worried.

There’s good news from another quarter, though. The stores have phoned back to say another CNH dealer has a sprocket for the McLellans’ combine, so they’ll soon be working again. 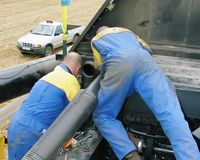 We’re back at the field we visited nine hours ago and major surgery is on the offing.

The combine driver has fetched a telehandler so that the weight of the gearbox can be supported once it’s unbolted from the engine.

Prising the two apart isn’t easy but once separated, it confirms their theory that the engine has partially seized.

A call to New Holland’s parts centre in France reveals there’s an engine there that can be trucked over during the hours of darkness.

Getting an engine out must be quite a task, I suggest to Steve. But he’s unfazed – apparently it’s mainly a matter of disconnecting the electrics and then lowering it with the telehandler.

The engine’s out. It’s been three hours of concentrated and strenuous work, despite what Steve says. I hardly dare suggest it, but perhaps he’ll be able to knock off early tonight…

…or maybe not. The phone rings. A combine over near Dunstable has taken in a lump of concrete which has smashed the rasp bars on the rotors (ouch) as well as a cast feeder plate.

Steve heads over to survey the damage and order the parts. He gets home at 9pm, which is pretty normal really.

The engine arrives from France and Rob comes into work so he can take it out to the field on the back of an Isuzu Trooper and trailer.

However, they still have to wait until 2pm for a damper plate to turn up. It takes a couple of hours to fit and the combine is working by 5pm.

Meanwhile there’s the Dun- stable combine to repair, the 8070 parts to fit, the skidsteer to sort out and the excavator to service.

And the phone will no doubt bring further dramas and puzzles.

That’s how it’s been for Steve for 17 years and he still loves it – most of the time.

“I’ve always said that I’ll do it until I stop enjoying it,” he says. “I like the variety and the fresh air and I always like the buzz of harvest.”

Another day, another batch of calls for Steve Gearing.