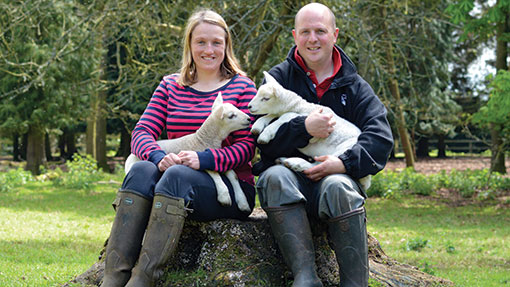 Two self-confessed novices have shown that establishing a profitable sheep enterprise can be achieved, despite having a limited budget.

The secret, according to the couple, has been opting for Lleyns, starting with ewe lambs and developing relationships with landowners to secure grazing.

Rupert Hill and Clare Smith already have a footing in food and farming, Mr Hill as a catering manager and Ms Smith as a former NFU food chain adviser and Sainsbury’s technologist. From a standing start 19 months ago they now manage a 200-strong flock of sheep in rural Oxfordshire alongside their day jobs.

Scale without the price tag

They started out in September 2012, buying 150 Lleyn ewe lambs. “Ewe lambs can be harder to lamb, but it was the only way of achieving scale with the money we had. Only half were at the right weight in November to go to the tup, so we only lambed 80,” says Mr Hill.

They were renting land for their new enterprise wherever they could find it – often moving sheep daily or weekly to fresh pasture. “Then we had an opportunity in June last year to take on 30 acres of grazing and 50 Mules at a private estate in Bletchingdon,” she explains.

Ms Smith, currently working for Daylesford Organic, and Mr Hill took more than a fortnight off their full-time jobs to oversee the birth of around 300 lambs, living on site in a caravan to work in shifts.

The traditional barrier of securing capital to buy the sheep was overcome by a family loan at market rate after banks turned down their loan application. But acquiring grazing land has proved to be the biggest hurdle.

“To start with, people thought we were hobby farmers, but we had to show them that were business people,” she says. What has helped them find good grazing ground is a relentless drive to be model tenants.

“Being a good tenant was really important – not leaving string and buckets lying around, not outstaying your welcome and being there straight away when sheep get out, says Mr Hill. “You have to be no hassle to the landlord.”

After nearly two years, the pair have finally been rewarded. Park Farm, which runs Kirtlington Polo Club – one of the many parcels of land where the sheep were grazed last year – has offered a share farming agreement to graze several hundred acres of arable land and the 10-acre polo pitches between September and March.

It will give the sheep good grass and, potentially, some stubble turnips to finish lambs on. An empty grain store could serve as a lambing shed too when required.

With more land the couple can now scale up. They plan to keep their best stock and buy-in later this year to take the flock to 400 breeding ewes.

“We will look at the performance of every ewe and select our breeding stock on that basis, culling out anything that’s a problem so it’s an efficient model and turning that into the most money we can,” she says. “We wouldn’t normally buy in anything other than tups, but we need to get the numbers up this year quite quickly.”

Read also: Meet the young tenants with a foothold in farming

Their customers have been abattoirs and some private sales so far, but the couple have plans to use Mr Hill’s catering knowledge and target the added-value markets of restaurants and festival catering.

For good eating quality and uniform size they will again go looking for good Lleyns, which usually achieve an R3L grade at slaughter. Ms Smith says that the ewes are good mothers, have few lameness problems and are hardy enough to live and lamb outside, eliminating the need for winter housing.

While the breed may not finish as quickly as a Mule Texel cross, it still has a good confirmation and uniformity.

“We looked at the Highlander and Easycare, but the Lleyn is better growing,” she said, adding that last year’s lambs killed out between 17kg and 19kg at the nearby Much Meats abattoir in Witney.

“Great food is what it’s all about, we want to produce great lamb for people to enjoy. We need to keep it affordable and so we focus on our production efficiencies and benchmark ourselves to see how we are performing compared with others.”

The pair follow the FAI’s five-point lameness plan, spot treating when required, which also eliminates the need to pen up the entire flock.

No hard feed is required, but the Lleyns and Mules are supplemented by hay, molasses and vitamins when the pasture quality is not as good.

“Lleyns are about two-thirds of the size of a Mule, so need less food, but lamb productivity is the same,” she says.

Looking ahead, they are sacrificing their holiday, having recently purchased a double-deck trailer, and they are looking into buying their own handling system.