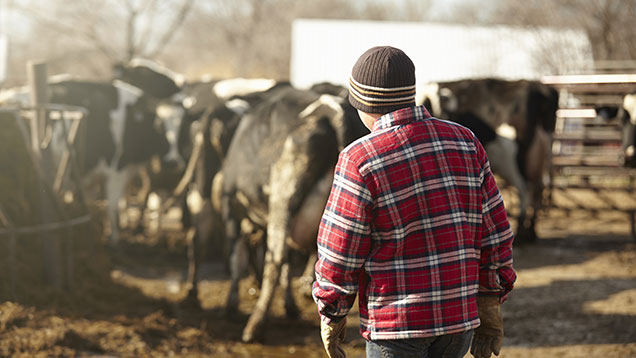 The 2015 pay and careers survey explodes many of the myths about working in the agricultural sector.

The gulf between the public’s perception of working in agriculture and the reality is huge.

One recent piece of research suggested as few as 4% of young people were considering a job in food and farming, with the widely held view that jobs are boring, repetitive and low-paid – and possibly even just for those with few other options.

But an exclusive survey of 1,300 Farmers Weekly readers, carried out in association with recruitment consultancy De Lacy Executive, has revealed the opposite is true.

The survey, conducted online in April 2015, was completed by farm-based workers (FWs) and by those working in agriculture-related businesses (ARBs).

This exclusive research was carried out by Farmers Weekly in association with recruitment consultancy De Lacy Executive.

The survey of 1,300 Farmers Weekly readers was carried out online in April 2015 and completed by farm-based workers and agriculture-related businesses.

The findings show a workforce that is increasingly educated, ambitious and motivated by the interesting work that it undertakes.

There are challenges to be addressed – such as a long-hours culture and whether the pay always reflects the level of responsibility – but most would be happy to recommend agriculture as a career choice.

As one respondent put it: “It’s a unique way of life for the right kind of dedicated person.

“Technology and machinery developments are also far more advanced than most of the general public realise.”

So what are the key findings and what misconceptions about working in farming do they clear up?

The first myth the survey dismisses is that working in agriculture is boring.

Asked to rate their place of employment, 79% said the work they were given was interesting.

The physical working environment was also rated as good or excellent by 70% of people.

When asked whether they would encourage people to join agriculture as a long-term career, 80% of farm-based workers and 87% of ARB workers said they would.

A ringing endorsement for an industry that is meant to be boring.

According to data collected by the government, the average person in the UK earns a gross annual salary of £27,200.

So how does the farm industry compare?

Pretty favourably for people working in the agricultural supply trade, where the average annual salary is £33,583 and 13% of respondents indicated they earn more than £50,000/year.

Many ARB workers also receive other benefits, with 39% getting their mobile phone bill paid and 38% receiving a company car.

We asked if you could change one thing about your job, excluding the salary, what would it be?

The picture for farm-based workers is far more mixed, however.

Annual salaries are below the national average, coming in at £26,193. However, this is before any benefits are taken into account and 87% of respondents had some sort of additional benefits including overtime, accommodation, their mobile phone being paid for or a company vehicle.

The figure also masks some higher wages with workers on 500ha-plus arable units earning an average annual salary of £34,849.

However, pay for workers on dairy and livestock farms was lower, with the smallest amounts being paid to people working in beef and sheep enterprises which were £23,719/year and £23,082/year respectively.

Myth 3 – The work is unskilled

It has been obvious for a number of years that there has been a growing professionalism in agriculture and the survey results bear this out.

The stereotype of farmworkers having few academic qualifications has been smashed. In fact, 73% have at least A-level education, and 48% hold either a higher national diploma, bachelor’s degree or higher.

In the ARB world, 83% have A-levels or above, and 48% of the workforce hold a bachelor’s or postgraduate degree. As farming gets more technological, this figure is only likely to rise.

Myth 4 – It is a place for unambitious people

The survey has a clear message to employers – if you want to keep your staff happy, motivated and productive, or attract new workers, keep them challenged and help them to meet their career aspirations.

Nine out of 10 respondents said challenging or interesting work was the most important factor when considering a potential employer.

Fifty-seven percent said the scope for promotion was either extremely or very important to them when considering a new role.

The opportunity to increase skills was cited as the number one reason why most people had taken their jobs.

Yet there are signs that employers could be doing much better in this area.

Nearly a quarter of respondents said their career prospects were poor and only 20% described their employer as being excellent at encouraging professional development.

People who work in agriculture do tend to stay in jobs longer than people in other industries.

Among ARBs, 44% have worked in the same company for three or more years.

However, 27% of workers across the whole sector describe themselves as actively seeking a new job.

That is both a threat and an opportunity for employers, depending on whether you end up gaining or losing a member of your team.

Of those open to a new job, 41% said their CV was up-to-date and one-third said they looked at job advertisements every week.

Two in 10 had spoken to a recruitment firm in the past 12 months.

The message to employers is clear – they cannot afford to be complacent if they want to hang on to the best staff or attract new talent.

Myth 6 – The hours are long

This is one area where the results don’t disprove the myth.

Farmworkers, in particular, repeatedly cited the number of hours worked as the thing they would most like to change about their jobs.

Several raised the issue of having no work-life balance and said during busy periods they barely got to see their family or have any social life.

Key questions raised by the survey

It is clear there are many opportunities to earn good salaries in agriculture – particularly in the supply trade.

There are also some attractive farm-based roles with wages exceeding the national average in East Anglia and the south-east of England.

Elsewhere, however, they fall below the national average and do require long hours.

Employers need to bear this in mind and particularly look at the wages of people working in dairy and livestock enterprises.

While 2014-15 has been extremely challenging financially, do the wages paid reflect the commitment and skills expected of staff?

It is time for a serious debate about the long-hours culture in agriculture.

There is a clear message from farm-based workers in particular that they feel they do not get enough time off and this has an impact on their family life.

Are employers asking too much of their staff by asking them to work excessive hours?

Should employers be looking to structure their workforce so they can offer more flexible terms and put less pressure on staff during peak periods?

These are no easy answers, but if employers fail to acknowledge the impact long hours is having, there is a risk that we will lose valuable workers from the sector.

Today’s employees expect a job with career development prospects and, if employers don’t offer that, they may walk.

Only 14% of respondents said they agreed strongly that their employer put thought into how they could progress their career.

Personal development is a two-way process and workers also have to take responsibility for planning their own futures.

But the survey suggests that employers perhaps need to take career progression and succession planning far more seriously than they have in the past.

Evidence reveals, however, that we face a huge challenge in raising the supply of skilled people.

To employers, the challenge is to retain good employees and to appeal to the best applicants in a competitive market.

To employees, the challenge is to continuously develop skills, qualifications and experience to thrive in a changing and demanding market.

There are laudable initiatives at school level to attract new recruits to the industry.

Where we still have work to do is to encourage applicants from other industrial sectors who have the skills we need now.

The agricultural workforce is ageing so there has never been a more important time for all of us think about how we ensure we have the best workforce in the world – both at farm level and in the many ancillary industries which are so integral to British agriculture.