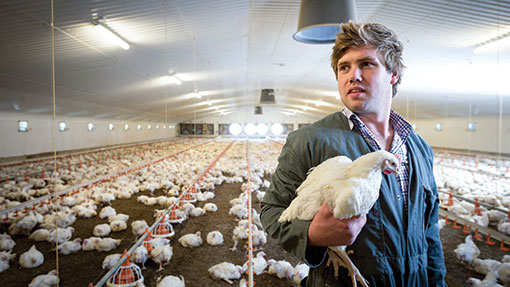 It was clear from the outset that one standard broiler unit would not be enough to occupy all of Harry Shepherd’s attention for long.

Even when Poultry World first visited his skeleton of a shed back in September 2013, plans for expansion, developing the business and getting the best performance from his birds were all well formed in his mind.

Given 12 months in a commercial setting, Harry has had a chance to prove he is able to meet with those measures that define early success. Financially, the business has progressed as expected, the bank manager is happy enough to extend the mortgage and builders have now been booked for the construction of a second shed.

Harry’s husbandry of the birds has improved with each crop, and this summer he achieved an EPEF (European Production Efficiency Factor) of just over 400. This is despite health challenges and teething problems with the new shed, its equipment and operating it with a relative lack of experience.

“The first year has thrown up so many opportunities,” says Harry, pointing to the different directions that now face him following his short time within the poultry industry.

He has had consultancy offers, is providing telephone support for a highly technical management system, and is still able to have part-time work that allows him to keep personal expenditure and the poultry business profits separate.

The big challenge in recent weeks and months has been keeping the shed temperate, despite an unusually hot stretch of weather. “Managing the ventilation in summer has been a completely different ballgame to winter,” says Harry. “These last two crops have been the most difficult.”

For the first seven days, the heat is not such a problem, he explains. But when birds get larger and begin putting on weight, keeping the temperature under control became increasingly difficult. “There was one Saturday where I didn’t know where to turn, really. Temperature was 3C above set and rising. I didn’t dare bring any more air into the shed for fear of chilling birds without the feather coverage.”

People who have got about 300-400 acres at home, who are coming back from university and want to make their mark, have been getting in touch
Harry Shepherd

In the end, the temperature was brought back under control, but a more long-term fix meant a fundamental change in the ventilation computer’s set-up. Instead of working on time, it now adjusts based on temperature – just one of many tweaks that has been made over the last year to make management easier.

One big change that Harry feels helped give a boost to that all-important EPEF score was the introduction of the Flockman feed control system.

“It basically keeps an edge on the appetite,” he explains. Alternate periods of light and dark are interspersed with feeding sessions, and pans are allowed to empty.

It trains birds to eat when food appears, and means that appetites are kept up when closer to slaughter weight. Initial results seem promising, says Harry.

“Because you restrict feed, growth is slowed in the early stages, allowing for better development. This cuts down on the potential for ascites later in the crop. There have probably been 60% fewer heart attacks since we’ve begun using it.”

There has also been a big reduction in feed consumption overall, combined with lower mortality and better feed conversion. This has all helped him attain an EPEF of 401. He joins just a handful of UK farmers that have managed to get above that golden standard.

“The first crop with Flockman was a bit of a nightmare,” admits Harry. It added a lot of time and effort to management. But once the pan settings had been tweaked, things began moving a lot more smoothly. “I think it’s paid for itself in a crop-and-a-half.”

Another management tweak has been a change of washing team. Harry now takes one washer himself and joins a team of three others, taking personal responsibility for about a third of his building. “I quite like doing it,” he says.

The last time Poultry World visited, the shed had experienced a number of health problems. For Harry it’s the hardest part of the job. “It’s hugely demoralising, when you go in to that shed and water consumption is down, litter is wet and the birds are looking unhappy.

“Generally, though, health is much better. We’re still getting niggles, and I don’t know where they come from. I’m just really focused on getting the right balance of air and pressure, as well as continuing to rotate litter to keep it from capping.”

The vagaries of operating in a free market, and in the independent side of the poultry sector – where farmers finance their own feed and chicks – has been a learning curve for Harry. A challenge has recently reared its head as his integrator lowered the price paid for poultry. “Hopefully it’s a temporary thing, and will come back round,” he says.

Therein lies the risks from the independent sector; the price of birds can change mid-crop, and the cut that is hurting right now happened with birds already in sheds. It was caused by a sudden glut of poultry dumped on the wholesale market, he explains.

Despite the challenges presented with a price in flux, he is happy for the moment with processor Sullivan’s, part of ABN.

Would he consider a switch to an integrator? “On the whole I think it works out to be more profitable to be with an independent. The only detractor with wholesale is planning, as supermarket suppliers will set catching times when the crop comes in. Planning would be much easier.”

Feed cost coming down has been the saving grace. But it has highlighted for Harry the importance of buying at the right time. “If I’d thought £160/t for wheat was cheap six months ago, and had fixed before the price had come down, it would have hurt the business.

“I need to get a little bit more clued up on fixing feed,” he admits, Equally, he says, he doesn’t want his business to be run on the lines of a man at the roulette table.

So there’s a lot in the pipeline following the first 12 months of our new entrant. In addition, he has been taking phone calls from friends who are also considering a move into broiler growing. “People who have got about 300-400 acres at home, who are coming back from university and want to make their mark, have been getting in touch.” One has asked Harry to consult on the construction of his first shed.

His focus will remain on the home farm, though, and the plan to have six sheds within the first 10 years is a target that has every sign of being met.

On the road to the next shed

Builders are booked for a second shed, and construction is due to start in April. The challenges and successes of the last few crops are feeding into design tweaks. The headline change is that it will be a fair bit bigger. “We’re going to go longer for the next shed, to about 400ft, as the site will need an IPPC licence anyway.” That will take about 48,000 birds, adding to the 38,000 capacity of the existing building.

“I’m going to install bigger roof fans, as well. Instead of 710mm fans, I will go for between 800mm and 900mm, as I’ve found minimum ventilation easier to manage using the roof rather than the gable end fans. I want the best ventilation possible for those crucial first days of a bird’s life.”

Gable end fans have thrown up another headache. The Flockman system needs an even distribution of feed, and birds have been scared to use those pans at the end of the line when the fans are spinning. This means feed could be empty apart from at the final feeders, which confuses the sensors. “I’ve moved the proximity sensors a bit further back,” says Harry. “People on ad lib would say it didn’t matter, but it’s essential with this system that the whole house is getting even amounts of feed.”

Harry’s bank has been pleased enough with the performance this year to approve financing for the second shed, coupled with the purchase of a biomass boiler. It means adding almost half a million pounds to the mortgage, but it’s a mark of confidence in the 26-year-old.

After much consideration he is “almost settled” on a 500kW unit supplied by EDM Energy, the firm run by friend and mentor Ed Barker. It’s one of the only boilers registered for RHI to burn shredded pallet waste – a key consideration. “Woodchip and wood pellet are going through the roof; I can get shredded pallet waste for £40-50/t.” The reasoning behind a 500kW boiler, when two at less than half that capacity would generate more subsidy, is that capital expenditure is cut almost in half.

“I can’t wait to get the next shed up – the next chapter in my 10-year plan. Instead of relying solely on the first, you can spread the risk if, say, one gets a hit. It will be a lot of pressure off my mind.”