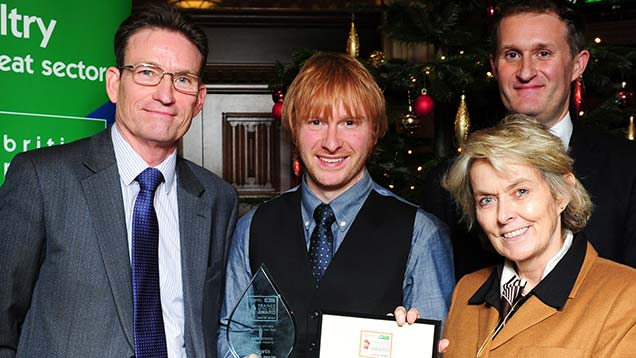 A manager of six grandparent-stock farms for Aviagen Turkeys has been named this year’s British Poultry Council/Zoetis Trainee of the Year.

His brother Joseph also works for Aviagen Turkeys and was one of three other finalists in the running for the prize, offered to those in the poultry industry who want further training.

The award was made at the British Poultry Council awards, held in the House of Commons on 2 December and was presented by chair of the Environment, Food and Rural Affairs select committee, Ann McIntosh MP.

They said Sam Jones showed “an edge of commitment to learning, willingness to develop and awareness of how he wants his career to progress”.

See also: Read about all four finalists for the BPC/Zoetis Trainee of the Year

He began as a weekend egg collector at the age of 14 and took up full-time employment three years later on an Aviagen Turkeys’ breeder farm in Cheshire. Gaining responsibility for pedigree flocks and achieving a NVQ level 3 work-based diploma led to a two-year management traineeship covering customer support and research as well as hatchery and breeder skills. This culminated in promotion to his current position.

Coinciding with this was the option to enroll on the new distance learning HNC course in poultry production at the Scottish Agricultural College, now known as Scotland’s Rural College (SRUC).

Aviagen Turkeys director of production and veterinary support Kenton Hazel praised Sam’s “aptitude for working with turkeys, thirst for knowledge and infectious enthusiasm to everything he does”.

Mr Jones intends to use the £2,000 grant to continue his studies at SRUC, possibly progressing to an MSc in applied poultry science. He said: “This would help me gain a higher level of understanding, ability and credibility, hopefully enabling me to move through the company into a more senior position.”