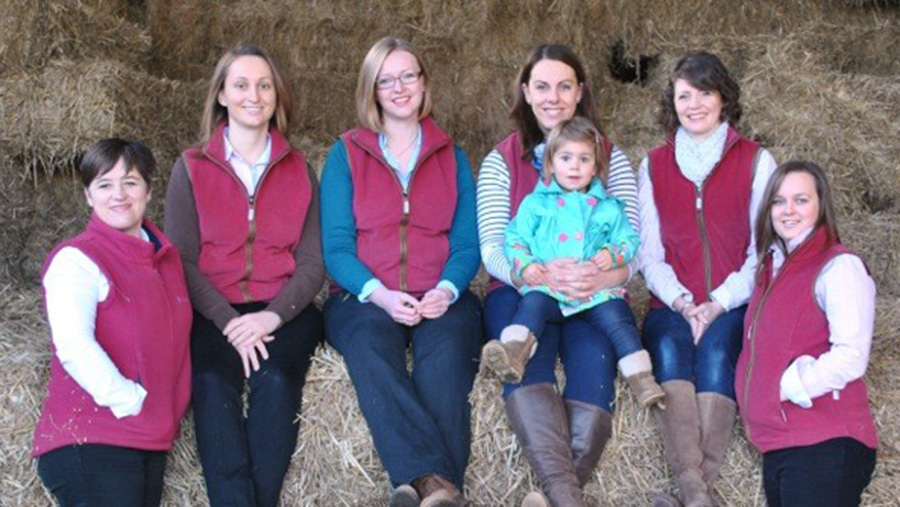 If your image of a typical rural chartered surveyor is a man dressed in yellow “land-agent cords” and sturdy brogues, think again.

Hannah Moule and her six-woman team cut an altogether different dash in their stylish jackets, jeans and boots. More girls in pearls than men in cords.

The eponymous, Worcestershire-based firm Moule & Co may be a niche player in the some-may-say traditional world of rural surveying, but it is blazing an independent and innovative trail.

“I am not a feminist,” insists Hannah Moule, a 34-year-old farmer’s daughter, who, in 2010, launched the firm from her parents’ kitchen table with a laptop, a car and a handful of local clients.

“But ever since I had my own egg round aged 10, I have always wanted to run my own business.”

“There were plenty of doomsayers who said: ‘You won’t be able to carve your way in.’ But in five years we have gone from 20 local farmers to 350 clients across Worcestershire, Warwickshire and the surrounding counties, advising on everything from record-keeping and cross compliance to farm budgeting and complex planning issues.”

“When I set up the business I couldn’t afford to recruit highly qualified surveyors, so I took on two assistants and trained them up”
Hannah Moule, Moule & Co

That growth has been driven by an entirely female team that now numbers four chartered surveyors, a rural business adviser and an office manager.

“We do work with male consultants and we have had a male student on work experience, although I think he found it pretty intimidating,” Hannah laughs.

The girls, as Hannah calls them, work in a converted barn on her family’s 20ha fruit farm at Hartlebury, near Kidderminster.

A pleasant working environment is key to the operation, she says. The office is open plan and employees “are aware of the need to be good to each other”.

That all her recruits have been women is accidental: “It’s about getting on with the job,” Hannah insists.

But undoubtedly, quality female recruits are attracted by a family-friendly approach and training opportunities.

“When I set up the business I couldn’t afford to recruit highly qualified surveyors,” Hannah says.

“So I took on two assistants and trained them up.

“There is no point being hard and fast about office hours. People are not just motivated by money”
Hannah Moule, Moule & Co

“As a mum [Hannah has two girls, Winnie, aged two, and Nell, four months], I appreciate how hard it is to work and have a family.

“I work a 40-hour week over four days so I can spend time with Winnie and Nell. If someone’s child is poorly, they can work from home or make up time. I can be flexible and it works if we are honest with each other.

“Mainly our work is on the end of the phone,” Hannah adds.

“There is no point being hard and fast about office hours. People are not just motivated by money. If I offer a relaxed office environment and the possibility of home working, I recruit higher-calibre people.”

Hannah evidently relishes her independent situation which, she says, has more to do with being “a young person trying to paddle her own canoe” than with being a woman.

She has always carved out her own career.

Graduating in 2003 from Harper Adams, with a degree in rural enterprise and land management, Hannah started work as an assistant auctioneer at Worcester market.

At 22, she was the firm’s youngest trainee to qualify as a chartered surveyor. “I was chucked in at the deep end, the one girl in the middle of 200 farmers, but I loved it,” Hannah says.

A stint at the NFU headquarters at Stoneleigh, Warwickshire, as a policy adviser for farm inputs and then working on the pilot badger culls gave Hannah valuable insight into government mechanisms so that, by 2010, aged just 28, she was ready to go it alone.

Hannah has always wanted to work for herself.

“The driver was that the business side gives me a buzz,” she says. So far, so copybook. But the second reason is not in many start-up business plans.

“I wasn’t married at the time but I had met my husband-to-be, Rob Collins [a cider fruit grower and contractor],” Hannah recalls.

“I was thinking that in a few years time I would be wanting to have babies, so, if I didn’t set up the business then, it would be another 10 years before I could do it.

“My plan was to get my business established and then take time out.”

And Hannah did get her business established. “Except I didn’t take any time out,” she laughs.

What she has done is convert a spare room in her parents’ house into a playroom for her two girls and employs a nanny.

“It’s a nice balance,” Hannah says. “I bring the kids to work and pop in to see them during the day.”

And it is a model, she believes, that can work for others.

“I am thinking of developing a crèche, but I am telling the girls in a very un-PC way that they’re not allowed to have babies at the same time,” she jokes.

“Rural chartered surveying is a lovely job: you live in a lovely part of the world, have lovely clients and talk about farming. What more could you ask?

“But it is not an obvious career choice for women and it is not one with a clearly defined career path. Too often women returning to work after having children are pigeonholed into marketing and administration, which is a shame and a detriment to the industry.

“It’s your choice. No one gives you anything. If you want to get to a point that has a work/life balance you have to make it happen.”

A woman in a man’s world?

“It should make no difference, you are just doing a job,’ Hannah says. But does it?

“I have never felt disadvantaged or treated differently,’ she says.

“As a woman, at the start you have to prove yourself more. Once you have established that you are not afraid, you get an easier ride. Men wouldn’t tell a girl off so much or shout at her.

“In practice, occasionally, when I have visited a client with a male consultant, the client will address his remarks to the consultant even though he is working for us.

“But it doesn’t offend me. It’s habit. I can count the times when clients have overstepped the mark on the fingers of one hand. Sure there is banter, but men just wind women up in a different way.

“Farmers are open-minded and family minded. And besides it is often the women who are more entrepreneurial and take the lead in grant applications or diversification that can make all the difference to a farm business.”