Stock fencing, trailers, crushes and grassland rejuvenators were all launched at the show, and Farmers Weekly was there to pick out the highlights.

Unlike some dumpers, the HD/12 really can carry 12t of manure, says Marshall, and other models in the new 6-16t HD Hybrid range can also achieve their indicated load capacity thanks to a square-cut and longer-than-usual scow-end body. 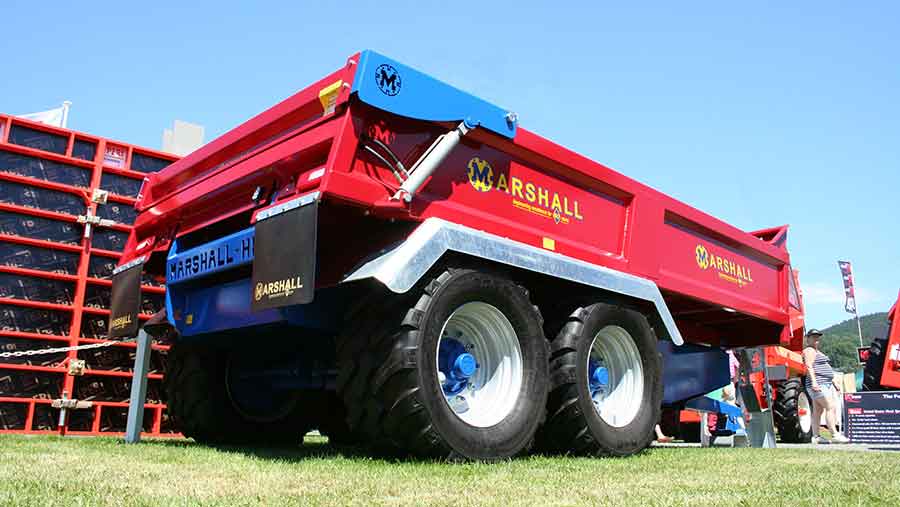 “The HD/12 has a 4.8m long body and it’s not tapered internally like on some dumpers, so at 7cu m there’s enough volume for a genuine 12t load of muck,” says David Marshall.

“Having a hydraulic tailgate – which can be removed – also helps, and the 60deg tipping angle ensures the trailer discharges cleanly.”

An 8mm floor and 6mm pressed sides cope with rock and rubble, while the 1.8m loading height means the trailer can be filled by skid-steer and small wheeled loaders as well as bigger machines.

The mid-range model exhibited at the Royal Welsh Show is equipped with optional 560/45R22.5 flotation tyres on 10-stud commercial axles in place of the standard 400/60R22.5 tyres and eight-stud axles, mounted on split oscillating running gear. 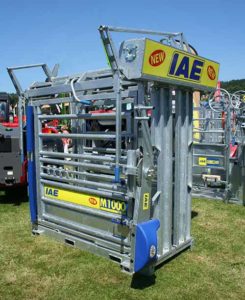 Infinite width settings between 260mm and 738mm are available as the operator pulls on either of two drop-down levers, with the sides firmly held in place once they have been brought in against the animal’s flanks and the lever is released.

There is no ratchet mechanism to slacken the side and no amount of pressure from the animal will move them, says IAE. Instead, a single lever pull actuates a spring-loaded quick-release to return the sides to the widest setting when the animal can be let go.

A similar “vari-lock” mechanism is used on the self-adjusting yoke to cater for animals, from calves to fully grown beasts, and three gates provide access on both sides with polymer-coated spring latches for quiet but secure operation. 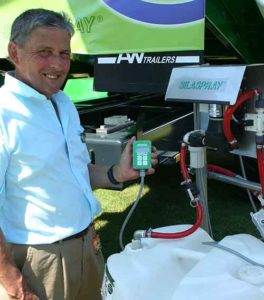 It tots up the weight of grass chopped and delivered into a trailer equipped with load cells, calculates the average t/hour throughput and uses a Bluetooth data connection to automatically adjust the settings of a digital flowmeter on the applicator.

“Without a very costly yield meter on the forage harvester, grass throughput and therefore the flow rate required for the correct additive application rate is guesswork or at best a calculation based on trailer volume,” points out Andy Strzelecki, Kelvin Cave technical director.

“But in our trials, we found the weight of grass per trailer load could vary by 3-4t or 20% during the course of the day. Repeated calibration of the applicator using our patented system takes account of such variation.”

The system is available exclusively on AW silage trailers as a complete application package at between £7,000 and £10,000.

The price includes a Silaspray applicator, which is designed to handle all types of additive. Liquid chemical and biological products can be used at rates of up to 550 litres/hour, equivalent to a maximum of 5 litres/t of forage.

Grants in Ireland equivalent to more than £200/ha for growing overwinter cover crops ahead of spring sowing have spurred development of cultivating and broadcasting options for ring rollers from Cross Agricultural Engineering. 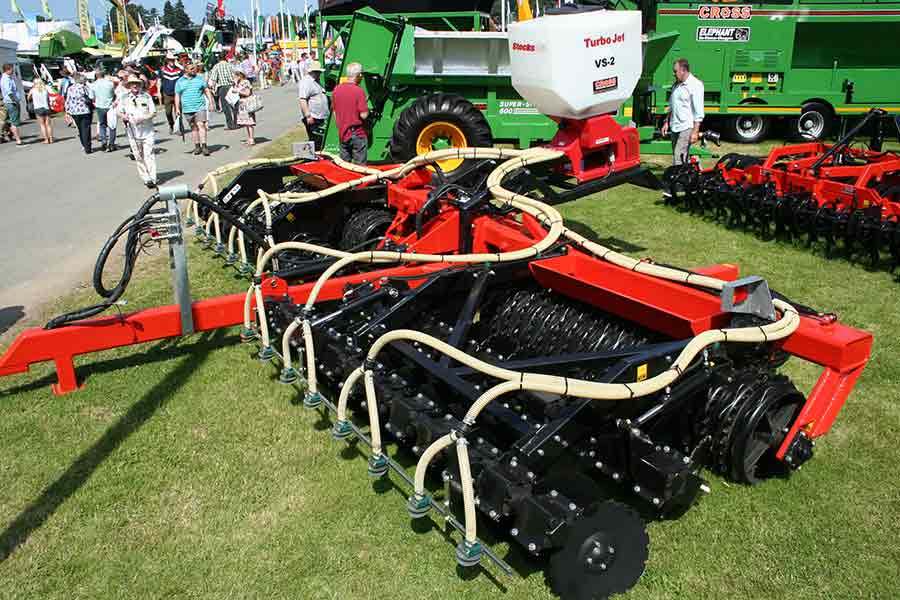 “Farmers in Ireland must now have a crop in the ground from November to January, and this implement provides a way of establishing cover quickly and easily,” says Simon Cross.

“It can also be used for rejuvenating grass pastures without the cost of a full reseed and operated simply as a roller, of course, so it’s a versatile piece of machinery.”

Cross rollers are available in 3m and 6.2m with a choice of breaker and plain rings in four different sizes for consolidating seed-beds in different soil types.

Flexible harrow and heavy-duty spring tine add-on modules are already available – the latter useful for working down ploughed land for broadcast sowing or ahead of a separate drill.

New options include two rows of double tines for scarifying grassland while broadcasting top-up seed and two rows of angled discs for working straight on to stubbles and broadcasting cover crop seed.

The 6.2m folding rolls are priced £16,500 with either type of tine fitted or £21,500 with the serrated discs, which are carried individually on rubber-damped trailing arms.

IAE’s first mobile sheep-handling system has a hydraulic jack and cylinder to extend the full-width bar that lifts the outfit for removing or replacing the wheels and drawbar. 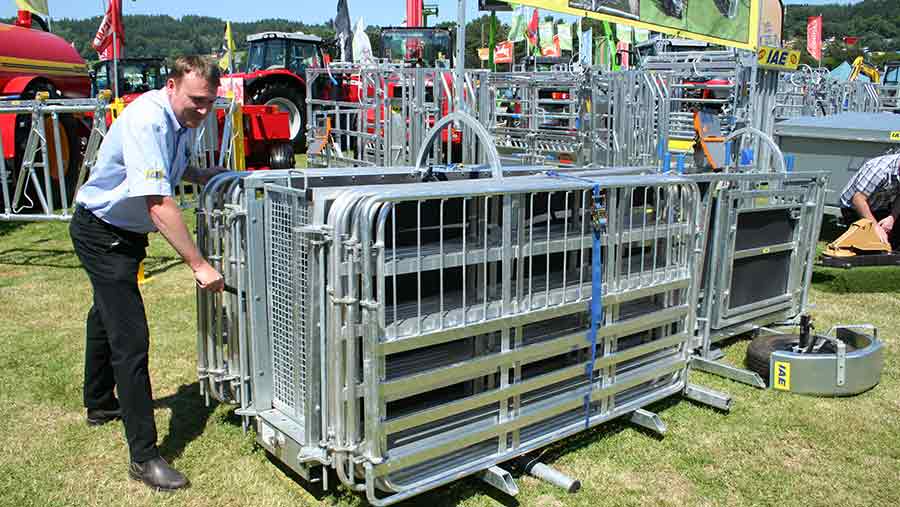 It also comes as standard with a 3.9m long Stockboard-clad race with drop-in meshed gates and shedding hurdles for drafting sheep in three directions.

Sizes are available for handling about 150, 300 and 600 sheep at a time, using either steel or a combination of steel and aluminium 1m high hurdles, which are connected in a way that allows for uneven surfaces.

Priced at £3,500, £5,500 and £7,570, respectively, each unit can be upgraded with a weighing system using built-in cells and a Gallagher display unit, quick-action twin gates in place of the drop-in units around the drafting area, and double-hinged shedding gates to allow drafting before or from the weighing platform. 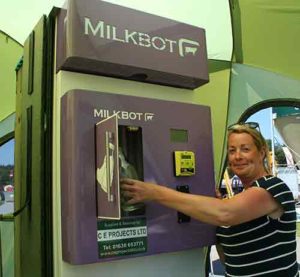 Buying milk direct from the farm is gathering pace, so Stafforshire-based CE Projects – better known for its slurry separators and pumps – has started importing the Milkbot from manufacturer Milk Automation in the Czech Republic.

It uses a germicidal lamp and a cold water flush cleaning system, and houses a 216-litre wheeled milk tank chilled to 4C in a double-locked cabinet.

Buyers can purchase milk using coins or chip-and-pin and contactless payment cards and, if change is short, the machine can dispense milk to a given value rather than by volume.

Buyers can use their own container – 100ml to 250ml – or one purchased from an adjoining vending machine, which can also be used to sell other products.

A single Milkbot is priced £10,000, while a double unit that could offer sales of both raw and pasteurised milk adds another £2,000.

It may look like a converted oil tank, but only because fuel storage specialist Harlequin manufactures the moulded housing for the DipFast sheep shower. 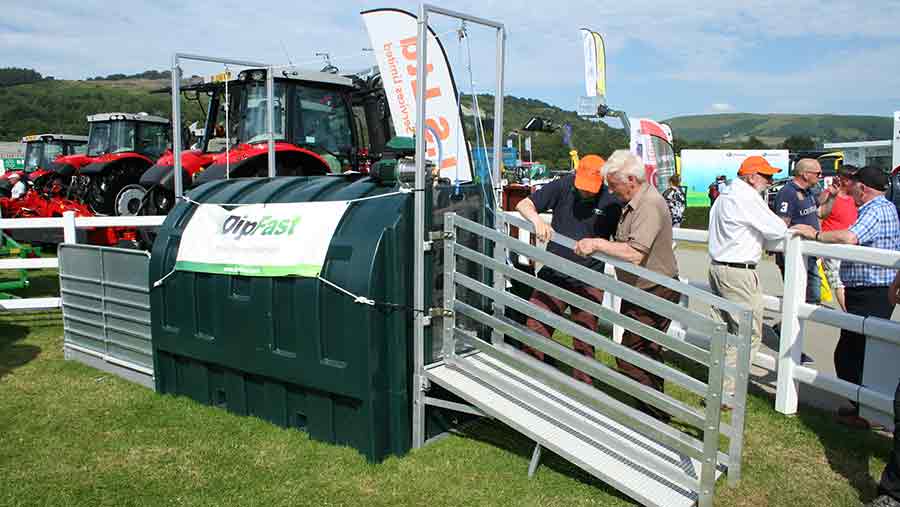 The prototype system being developed by Irish sheep farmer Mark Kelly and his three sons after he cobbled together a unit for use on their County Tyrone farm is designed as a self-contained unit for one-man operation if necessary, with all external fixtures being placed inside for transport between locations.

Rope-operated entry and exit doors are fitted to a chamber equipped with eight spray nozzles positioned at three different levels and supplied by a reservoir in the base. A grippy GRP material is used for the ramps and floor.