Oliver Mark, Edd Mowbray, James Andrews and photographer Jonathan Page pick out some of the highlights among the telehandlers. 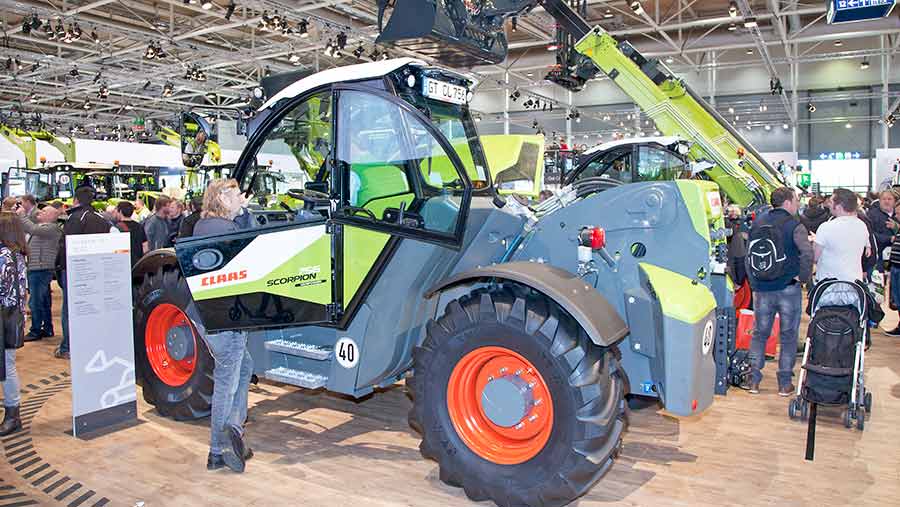 After 18 months of waiting, Claas has finally unveiled its line-up of Liebherr-built loading shovels and telehandlers.

Still badged as Scorpions (like the outgoing Kramer-made machines), the new range of telescopic loaders spans lift capacities from 3.5t to 5.6t and max reaches from 6.1m to 9.75m.

As before, Deutz engines provide the muscle – 136hp or 156hp – and Varipower hydrostatic transmissions put the power to the ground. However, the hydraulics have been beefed up by 30% across the board.

While many of the controls will be familiar to drivers of existing Scorpions, there are a number of new features including an automatic handbrake, in-board multi-plate brakes and an anti-stall Dynamic Power function that revs up the motor when the joystick is used.

In addition, there are limited slip diffs front and rear on all but the two largest models which have proper differential locks.

Power is provided by a range of engine manufacturers including Yanmar, John Deere and Liebherr itself, and climbs from 63hp to 228hp.

The wheels are spun by either a Spicer hydrostatic set-up or a true tractor-style ZF stepless CVT using a combination of mechanical and hydrostatic drives – a first for a loading shovel or any sort of handler, according to Claas.

Prices are yet to be confirmed but Claas UK says it will initially concentrate on the two models that lock horns with JCB’s two best-selling clamp climbers – the 435-S and 419-S. These new green-and-cream shovels will make their first UK appearance at Lamma, alongside the new Scorpions. 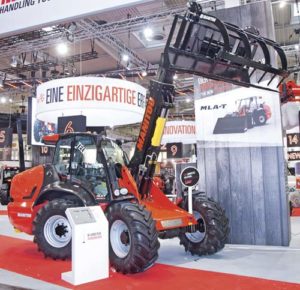 Manitou is hoping to get its feet firmly back in the pivot-steer market with a new version of its MLA handler.

As for the transmission, it uses the maker’s M-Vario Plus CVT unit. This has two hydraulic motors that work in tandem at low speeds to improve power.

According to Manitou, this gives the MLA comparable pushing power to a conventional torque-converter driveline.

At higher speeds the drive is handled by just one of the motors to help improve fuel consumption.

The cab has a familiar Manitou feel with the JSM palm-shaped joystick in charge of boom controls and the forward/reverse shuttle.

After the sales agreement for its telehandlers with Claas ended earlier this year, Kramer has added to its loader range by teasing the Hannover faithful with a prototype four-wheel-steer machine to complement the rebranded range of handlers. 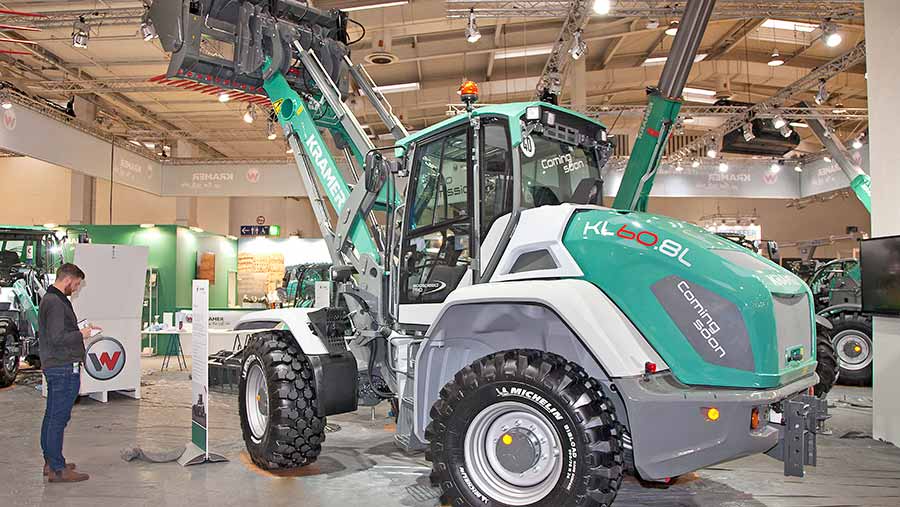 The KL60 prototype features many similarities with the telehandlers, including using the same beefed-up Ecospeed-pro hydrostatic box seen on the larger 447 loaders.

It doesn’t stop there either, as Kramer has stuck with the two Deutz engine options offered in its telehandlers – the smaller 136hp and the larger 156hp.

Shod on Michelin Bibload 500/70 tyres attached to Carraro axles, the prototype can stack pallets to over 4m high and comes with a choice of two buckets offering 1.35cu m and 2.75cu m and a 5t lift.

The company hasn’t decided on the price yet, but said it will be available in the UK early next year.

The UK pivot-steer market has been dominated by JCB’s TM machines for the past few years, but Italian maker Venieri hopes to pinch a few sales with its first range of telescopic bend-in-the-middles.

The company is better known for its heavy duty construction kit and also sells its big-wheeled loaders through agricultural dealer RVW Pugh in Powys. 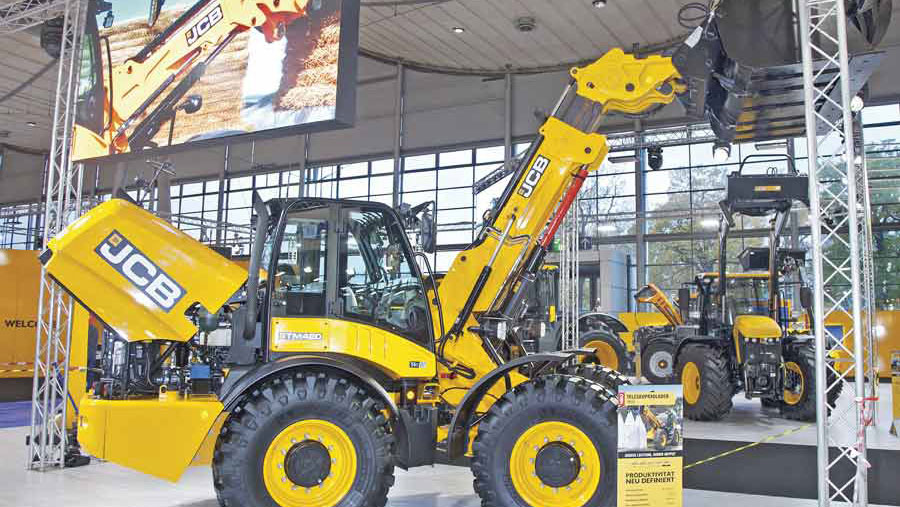 JCB launched the latest addition to its pivot-steer range on foreign soil.

Other spec details are pretty similar to the 320 models, including the cab and 145hp, 4.8-litre JCB Stage 4 engine. The old six-speed powershift gearbox keeps its place on the new machines, too. 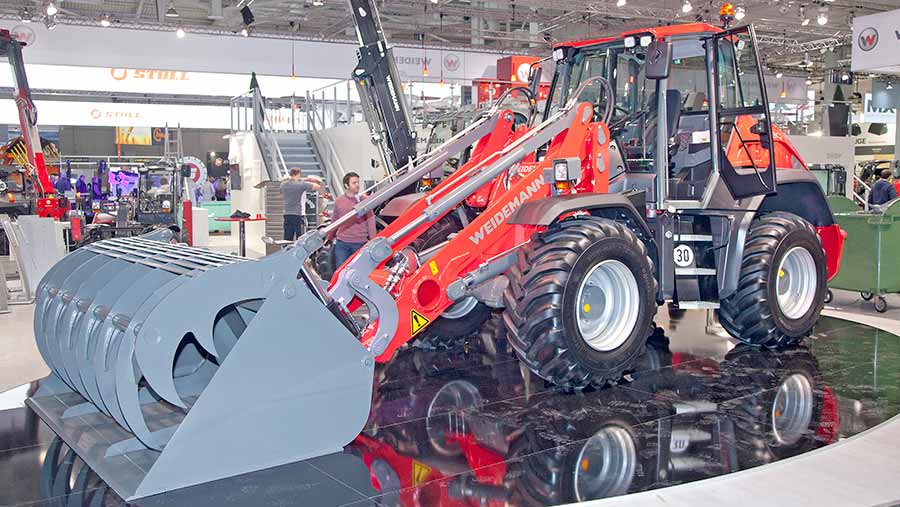 The freshest face in Weidemann’s pivot-steer shovel line-up is the hunchbacked 9080 capable of hoisting 5.3t to just shy of 4.3m.

It uses the same four-pot, 136hp Deutz block as Venieri’s new loader, but interested punters will have to pay a bit extra to get the 40kph gearbox upgrade.