Few shows can match Agritechnica as a global launchpad for significant new farm machinery and this November’s event looks unlikely to disappoint.

The exhibition’s organiser, DLG, says more than 2,750 firms from 51 different countries have booked stands, and there is a particular push to attract farmers from the UK, with an International Farmers Day planned for Thursday 14 November.

Pre-registering on the show website for this day means there is no need to pay the otherwise-required €22 (£20) for entry tickets. 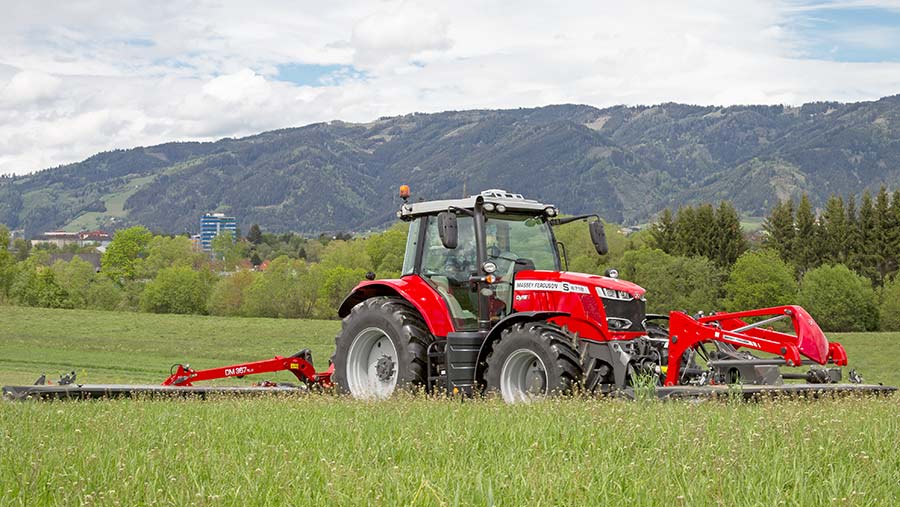 Massey Ferguson is expected to announce significant new mid-range tractor news at Agritechnica, but is keeping the details under wraps until the show.

However, more information is available of planned hay and forage equipment launches, which include new DM FQ front-mounted mowers in 3.1m and 3.6m variants.

Specifications include a “pull-type” headstock, TurboLift suspension and the option of either roller or tine conditioner systems.

These are based on the former Lotus design of Lely, whose grass equipment business was purchased in 2017 by MF parent Agco.

Finally, the MF bale wrapper range is doubled with the addition of a new heavier-duty TW 160 model to join the existing TW 130. 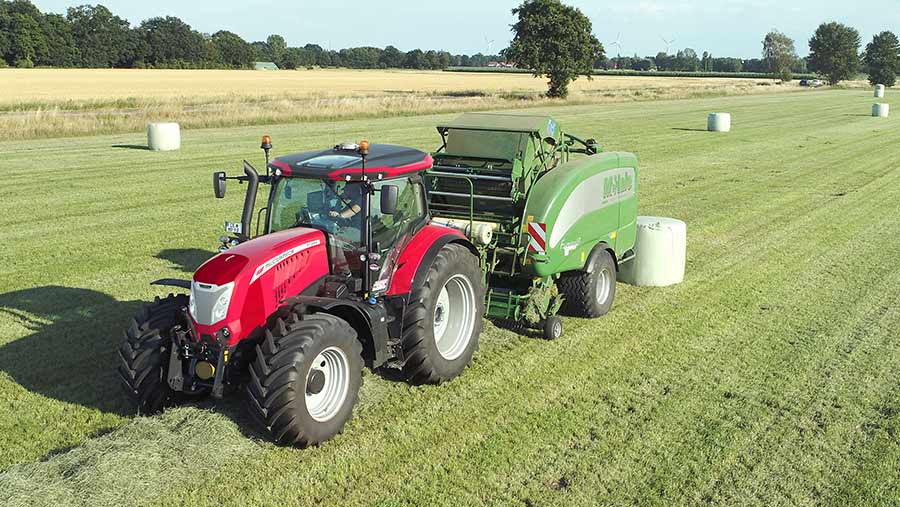 The four-model line-up of 180-240hp six-cylinder tractors features stage 5 FPT engines and a four-range CVT capable of speeds from 0.04-50kph.

Externally there is new styling and a revised 12-unit worklight package, while inside the cab is a new Data Screen Management terminal with five programmable buttons on the armrest.

This allows the driver to customise the way the tractor is operated and store up to five functions to suit the implement attached.

For those seeking the ultimate in comfort and control positioning, also new is electrically adjustable steering wheel tilting.

McCormick has plans to highlight the capabilities of its fleet management telematics package, too. 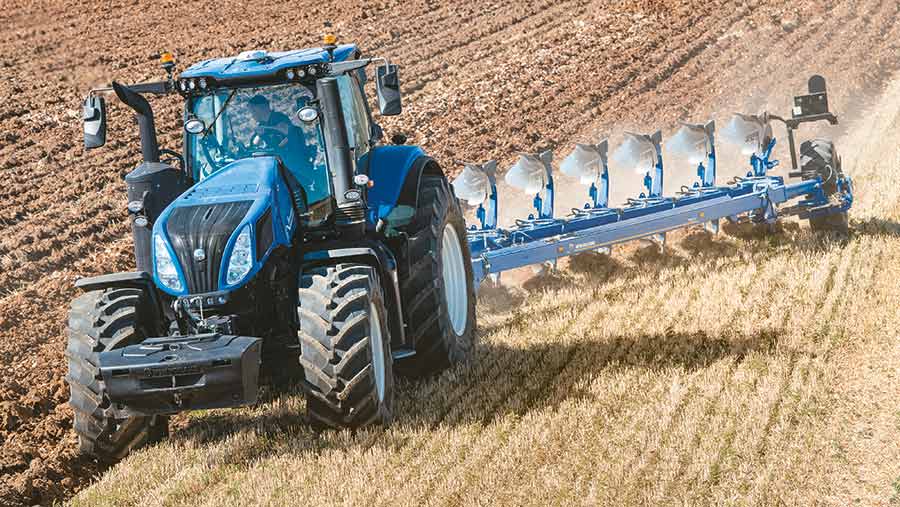 New Holland is expected to give a European debut to its new T8 PLM Intelligence tractors – the Case-IH Magnum AFS Connect equivalent – which feature substantial cab and connectivity upgrades.

The operator gets more room, courtesy of a 20cm wider cab frame, while a SideWinder Ultra armrest includes configurable controls.

There is also tablet-type instrumentation, plus a larger 12in Intelliview 5 operating terminal and two-way telemetry possibilities.

On the combine front, there is a new UltraFlow stepped drum for CX8 six-walker combines, plus fancier cab interior materials.

The CR combines get the same cabin treatment and now all meet Stage 5 emissions regs, with power topping out at 700hp in the CR10.90 flagship. 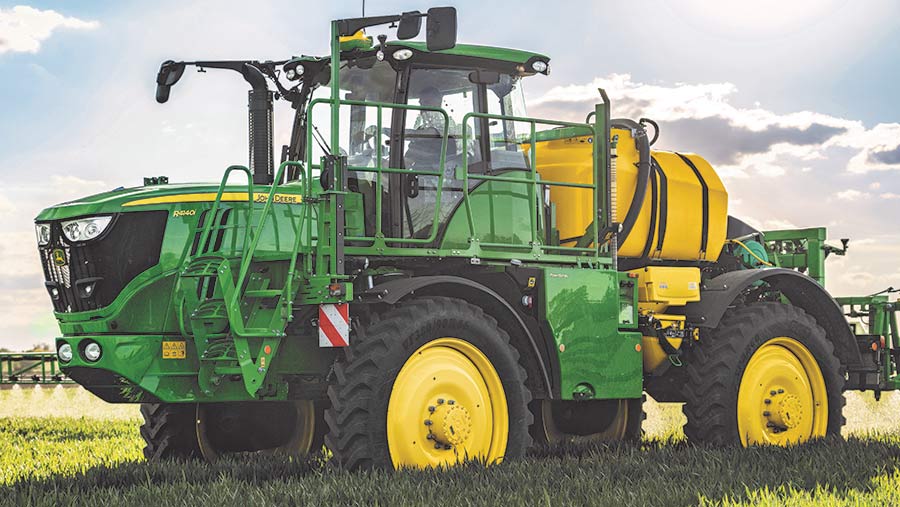 John Deere looks set to unveil some significant news across its wheeled and tracked tractor ranges in Hannover, but while details remain under wraps for now, the firm has confirmed some other show launches.

These include the R4140i and R4150i self-propelled sprayers, featuring improved lighting and a revised cab available in two spec levels, with optional category 4 filtration.

There is also a new-generation operator interface with the firm’s 4640 display mounted on a new armrest and the option of JDLink telematics for wireless, two-way data transmission, including free activation for five years.

Extras include a 50kph top speed and ExactApply, which allows nozzles to be changed either “manually” from the cab or automatically depending on application rate and speed.

It can also maintain droplet size regardless of forward speed thanks to a pulse-width modulation system.

Also look out for news in the forager, big baler and data management fields. 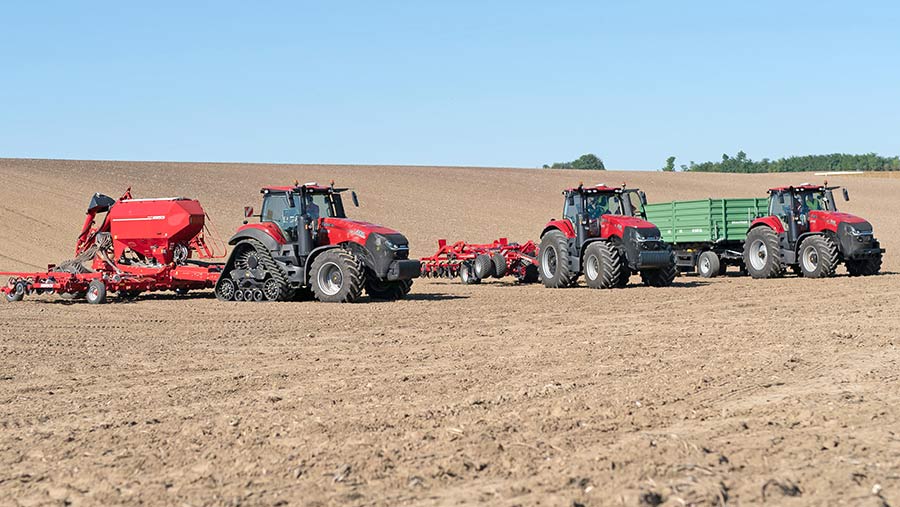 Aside from new Vestrum CVXDrive and top-end Stage 5 Puma models, the major tractor launch from Case-IH looks likely to be its AFS Connect Magnum tractors.

Inside there are tablet-based instrumentations and a multicontroller joystick, plus armrest controls, including remote valves and other features that are configurable to operator preference.

There is also a new AFS Pro 1200 display and integrated telemetry capability.

Case also plans to unveil the latest generation of its smaller Axial-Flow range, with the new 150-series machines replacing the former 140-series.

The new models are powered by Stage 5 FPT engines and benefit from new styling, a wider front tyre option and the availability of a new 8.5m header to suit 8m controlled traffic systems. 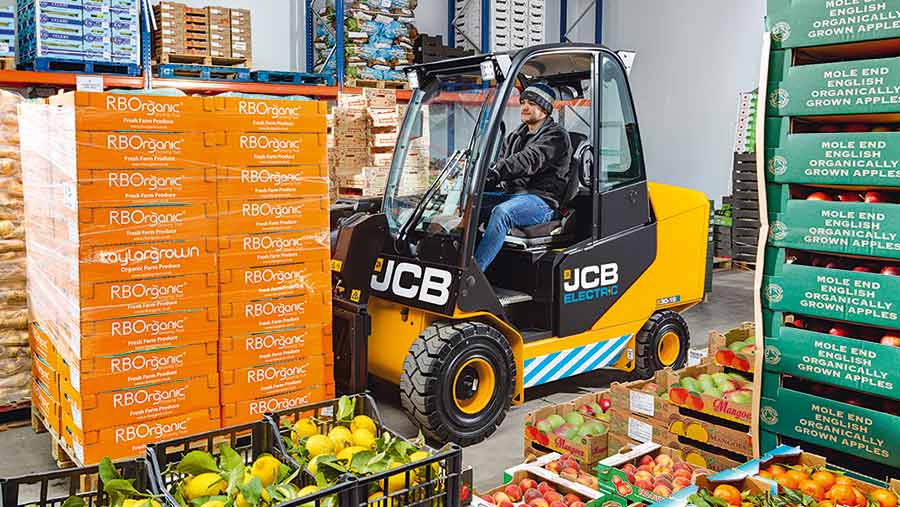 JCB’s electrically powered JCB Teletruk could appeal to farms with livestock units, packhouses and other environments, where low noise and no smoke are key attractions, the firm says.

Fully sealed and weatherproof bodywork protects the driveline and other key components from debris.

At the opposite end of the handling scale, upgrades being introduced to JCB’s key wheeled loading shovel models include a 6.7-litre Cummins engine with increased 282hp power output for the 457 Agri, while the power for the 437 Agri rises to 195hp.

The 427 Agri remains at 179hp, but like other models, it benefits from a “Comfort” engine setting, which can be selected to reduce power consumption when on less-demanding tasks.

Added to an auto-stop feature that shuts down the engine after a period at idling speed, plus powershift transmission upgrades, JCB claims potential fuel savings of 10%. 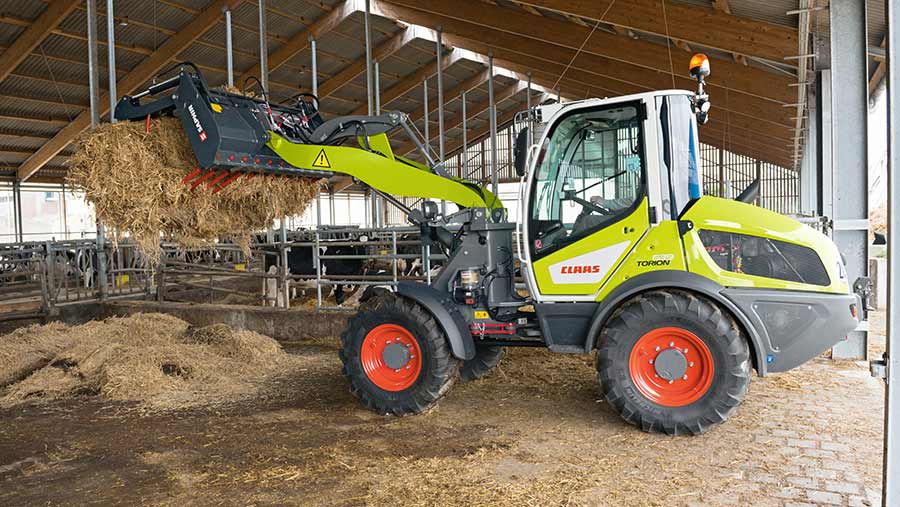 While it is staying tight-lipped on tractor news, Claas has several launches planned for Agritechnica, including a new Jaguar forager flagship – the 925hp MAN-powered 990.

Elsewhere, there will be two compact Torion wheel loaders – the 3.8t-capacity 639 and 3.4t 535 – both featuring hydrostatic transmissions and Z-linkage boom geometry. 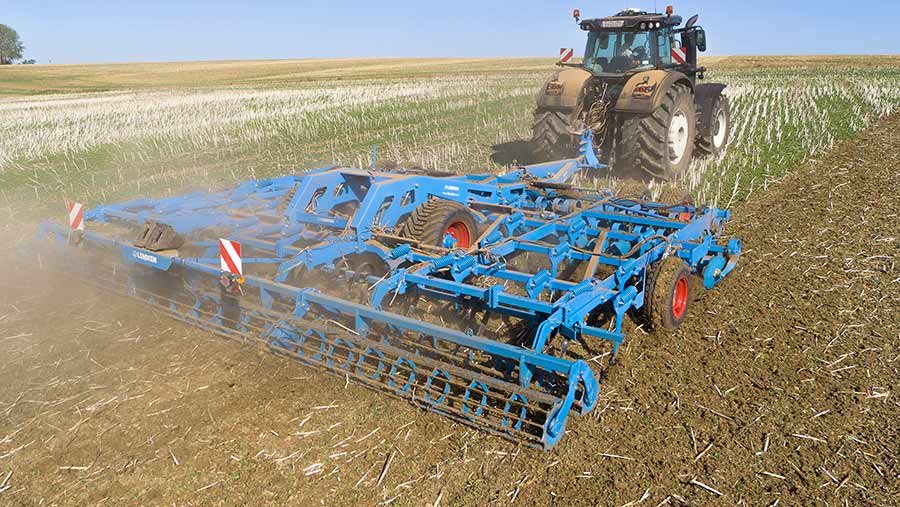 Beyond the first fruits of its recently announced deal with Sulky to add the firm’s fertiliser spreaders to its line, debut products on the Lemken stand will include a new cultivator – the Koralin.

The 6.6m or 8.4m implement is designed to make the most of cultural weed control opportunities, says the firm, working at shallow depths with a combination of discs and a tine frame with duckfoot sweep shares.

Two rows of vertically operating discs are arranged in front of the horizontally operating tines to break up the soil and process organic material.

Discs are leaf-sprung 510mm units adopted from the Heliodor compact harrow, while the duckfoot sweep shares cut a 350mm path and are arranged symmetrically in three rows, with 30cm spacing and 2.5cm overlap. 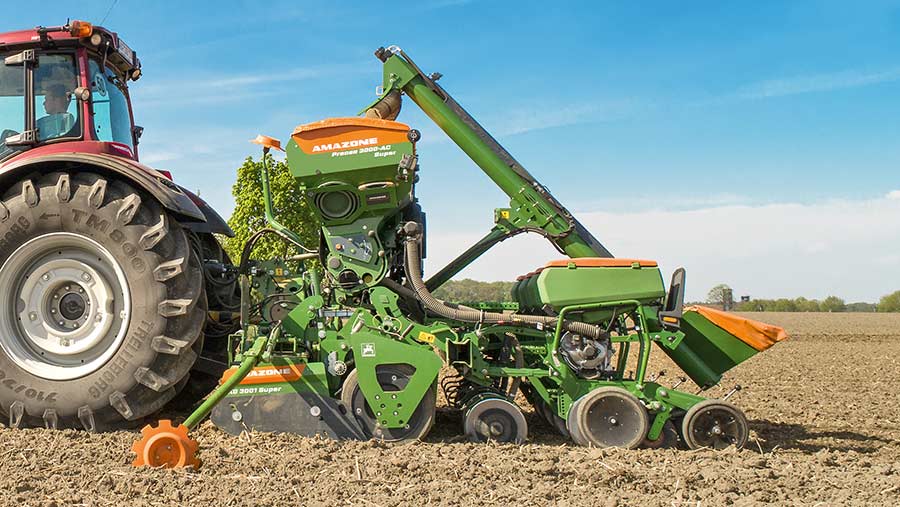 Available as a rigid 3000 model, a 3000-A harrow-mounted variant and a telescopic 4500-2 version, Amazone’s Precea precision drill is built around a singling method combining the characteristics of the firm’s ED and EDX.

The seed and the entire metering unit are pressurised, with the seed flowing from the hopper to meet the face of the centralised singling disc, which hermetically seals the metering unit.

Seeds are pressed against the disc holes and carried along as the disc rotates, with any excess seeds removed by a series of stripper fingers.

After singling and as soon as seeds reach the propulsion channel, the overpressure on the centralised singling disc is interrupted, forcing the seed into the channel.

An optical seed monitor is located above to observe singling and indicate any misses/doubles on the control terminal. Drilling is reckoned accurate at speeds as high as 15kph. 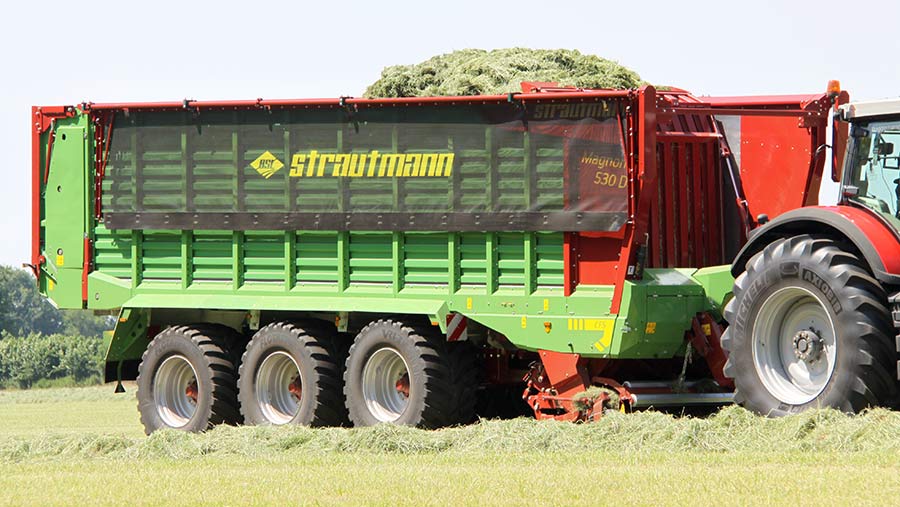 Replacing its Tera-Vitesse models, the Magnon CFS is the new head of the Strautmann forage wagon line, available in three models of 42, 46 and 52cu m capacity.

It incorporates a 2.25m Flex-Load pick-up which is hydraulically powered, allowing infinite speed adjustment. It has the ability for pick-up speed to adapt automatically to tractor forward speed.

It features plastic tines arranged in six V-shaped rows, with steel “strippers” mounted low between them to prevent grass from wrapping inside the pick-up. Tine replacement requires the loosening of a single screw.

A hydraulically pivoted front panel helps achieve maximum load compression, automatically swivelling to the front once the rear is full to provide a further 5cu m of loading capacity.

This is said to have helped make the Magnon more compact than its predecessor, despite identical capacities.