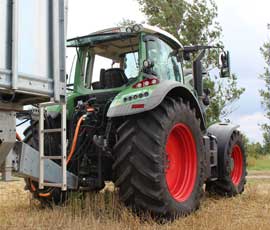 Fendt has announced a series of product updates that will be seen for the first time at next month’s Agritechnica show.

This year has been a busy one for the Bavarians, who have added new combines and foragers to finally complete their harvesting line-up, while total tractor sales look set to tally a record 18,000 by the turn of the year.

There’s also Agritechnica to throw into the mix and Fendt, like the other big German players, is set to reveal a flurry of machinery updates at the show.

The first of those is the refreshed 220-390hp 800 and 900 series tractors. Changes are largely emissions-driven and there is little visually to tell the tractors apart, but it means Fendt is the latest tractor builder to add Stage 4 compliant engines to its high horsepower line-up.

It’s been achieved by adding a passive particulate filter and exhaust gas recirculation to its SCR/AdBlue arrangement. The approach does drink AdBlue more quickly than an equivalent active filter system but should be better on diesel, says Fendt.

There’s also a new twin turbocharger set-up, which is said to provide more power and better fuel consumption at low crankshaft speeds. There’s an additional intercooler, too, and a reversible fan can be picked from the options list.

From a driver’s perspective, changes are limited. New optional extras include Fendt’s Vario Grip tyre pressure regulation system to improve fuel efficiency and reduce tyre wear when switching between tillage and transport. It takes up to 10 minutes to pump from 1 bar to 1.8 bar but it can be done on the move.

Elsewhere, there’s been no confirmation of Fendt’s exact plans for a 400hp tractor. With most rival makers already offering a tractor of that size, and a few pictures swimming around the internet, it seems only a matter of time before we learn more about the 1000 series

Changes in the cab include a new-look terminal that can now cater for automatic section control during spraying, fert spreading and drilling to cut down overlaps.

There’s also the new 7in VarioGuide Light – a basic version of Fendt’s existing terminal system. It costs about £4,000 less than the all-singing-all-dancing Varioterminal and is largely designed for tillage-only tractors that don’t need to work so precisely – the system uses Egnos correction signal to get accuracy within 20cm – but it’s not possible to upgrade it to the higher-tech version in the future.

The long-awaited Katana forager was finally launched last year, and the Germans have moved quickly to add extra models to the range. The bigger 850hp Katana 85 looks better suited to UK farmers, but there’s also a new 500hp version.

The bigger model is powered by a 21-litre V12 Mercedes motor and has a larger radiator. It’s also available on bigger tyres and has what Fendt claims to be the largest cutterhead on the market. At about £390,000, list price is around £65,000 more than the Katana 65.

So far there’s only been a handful sold in the UK, but Fendt has targeted 5% of the 165-unit-a-year market within the next couple of years. About 120 will have been built worldwide by the end of 2013.

Half of Fendt’s reported €62m yearly R&D budget is splashed on finding ways to limit engine emissions and that now includes a study into the potential of electric drive.

At 2011’s Agritechnica show we saw a bunch of manufacturers making noises in favour of electrical drive systems. John Deere has already dabbled with an electricity-producing production tractor, but its output is far lower than the Fendt trial tractor’s 130kW of electric power.

A four cylinder, 4.9 litre engine has been plumbed into a 700-series frame to make space for the 700V generator (located between the engine and transmission), wiring and a special heat exchanger.