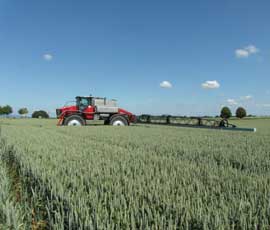 One of the more eye-catching machines at this year’s Agritechnica show will be a new high-speed self-propelled sprayer from Horsch Leeb. Five years in the making, this brand new mid-mounted cab design joins the front cab PT version and 6-8,000-litre trailed sprayers in the Horsch line-up.

Its main selling point is the ability of the booms to travel at 30kph in the field even when they’re just 300mm from the crop or ground. There’s the obvious comfort advantages of having the cab above the front axle, too. It will also manage 60kph on the flat, so will have a big appeal for those clocking up the road miles.

The new boom control system involves the arms being held almost separate from the main chassis to reduce the number and severity of bumps transmitted from the tractor unit to the boom section.

It is mounted on a central pivot point, which is designed to help cut out the yaw movement of the boom around corners. Two hydraulic cylinders controlled by quick-acting hydraulic valves at the base of the boom allow each side to follow the ground contours and will adjust the boom position before it starts bulldozing through the ground.

Boom options extend to 36m and hydraulic track width adjustment is standard. Ground clearance is up to 1.6m, which will make it a good choice for large-scale maize growers.

Spray accuracy at high speed and low height shouldn’t be a problem either, says Horsch. Using 80deg nozzles and small droplets keeps coverage accurate, it says, and the booms will be used across the rest of the Leeb range in the future.

Front-mounted power comes from a six-pot Mercedes motor. It currently kicks out 330hp, but horsepower is due to be upped for production models. That’s coupled to a hydrostatic transmission with a hydraulic motor for each wheel – a less bulky alternative to traditional mechanical set-ups.

Inside, the cab is kitted out with a Claas control system, but production models will have a different bonnet to the one shown in Germany.