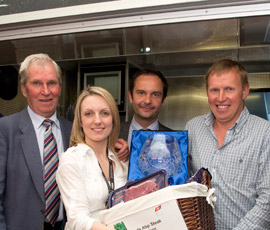 This year’s Scottish Asda/ABP BeefLink steak competition staged at the Royal Highland Show, Ingliston, Edinburgh, has been won by a steak from a Simmental cross young bull bred by Kinross suckler and arable farmers William Nelson and his son, Billy.

The steak came from a 320kg carcass, classified U-3, which was consigned to ABP’s Perth abattoir. The young bull was 13 months old when slaughtered and is one of 80 prime cattle the Nelsons sell to ABP every year from the farm’s 100-cow suckler herd.

And it was another Simmental cross young bull which claimed second spot in the competition, with this one coming from a 358kg carcass from a 15-month-old beast, which graded U-3. This one was consigned by St Cyrus, Andrew Braes from Aberdeenshire.

And in third spot in the competition, which was judged by celebrity chef Ainsley Harriot and a panel made up of members of the public, was a steak from DR Blair, Cupar, Fife.

This steak came from a 361kg Charolais cross carcass which was slaughtered at 21 months old and graded U+3.

Asda’s beef buyer Amy Austin said: “The quality of all 12 steaks was exceptional and we had an incredibly consistent group of steaks from some excellent farmers. To have such an great selection of steaks forward for this competition was true testament to the quality of the farmers and the cattle they supply to Asda week in, week out.

“The quality of the steaks on show made for a great spectacle and I’m sure the other competitions due to be staged at the Great Yorkshire and Royal Welsh shows will match this one for the quality of entries.”