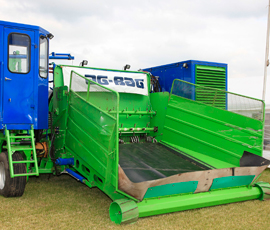 Ag-Bags for forage burst on to the UK scene  back in 1979. The principle was simple: rather than putting your forage into an often-tatty, hard-to-seal silage clamp, you get a machine to push it into a large sealed bag.

There are now some 27 Ag-Bag machines at work in the UK, most of them operated by specialist contractors.

The firm reckons that 280,000t of grass is bagged across the UK each year and that figure is rising 15% a year as farmers wanting to store maize, grass and sugar beet for biogas plants add to the total.

The need to boost throughput has also prompted the UK company to test the market with this bigger unit on show at Cereals.

It has 430hp rather than the previous 177hp, which allows grass to be pushed into the bag even harder.

Other changes include a move to knock-off  caps on the tines that draw the material into the bag.

There’s also now an anchor that sits in the flow of grass and can be adjusted to give either low or high compaction  according to the farmer’s requirement.

This only started on a commercial scale in the last year, says the company, and has meant that the firm is looking to buy a Pistenbully tracked vehicle (very similar to the sort generally seen smoothing the snow on Alpine ski slopes) to allow the machine to both travel over boggy land. It also gives an effective way to keep the silage clamp compacted.