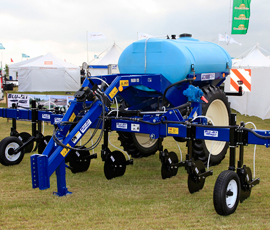 Cultivation kit buyers now have another new name to add to their shortlist as American firm Blu-Jet debuted at the event.

Most eye-catching was the Nebraska-based company’s AT2000 – a liquid fert applicator that is able to direct the liquid either through nozzles or a trailing knife system straight to the ground.

It sounds like a pretty radical change to fertiliser application, using individually-suspended leading disc to make a slit in the soil.

The spacing of these can be adjusted from 450-800mm depending on the crop type – the nine-disc version on show had discs spread at 750mm intervals and a 7m working width.

The importer – Devon firm Amia – suggest that the AT2000 could be used for all early-season application.

Blu-Jet provides the metal work for both nozzle and trailing knife application systems, so operators can adjust their working methods depending on crop type and stage of development.

No prices have been set yet, but expect to see plenty more from Blu-Jet. It’s a pretty big company the other side of the Atlantic (specialising in large-scale strip-till kit) and it plans to slowly bring more kit to the UK market.