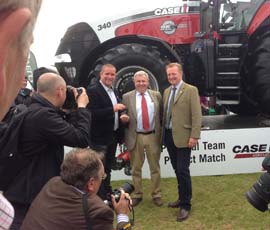 A Case IH silver edition Magnum 340 was auctioned off for £113,500 on the opening day of Cereals, raising £26,000 for the emergency relief fund of the Prince’s Countryside Fund.

The tractor, which is the only one of its spec to come to the UK, is a limited edition based upon the 374hp Magnum 340.

Case IH had pledged that all of the money raised over £87,233 – half of the list price of £174,465 – would go to the fund which gives financial support to farming charities such as RABI and the Addington Fund.

The tractor was auctioned by Bill King of Cheffins.