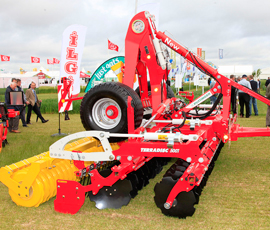 Now available with 4, 5 and 6m working widths, the folding Terradisc has the same twin-arm disc mounting system as the rigid versions, which should improve the consistency of the working depth, says Pottinger.

The biggest difference is the natty folding design that hoists the wheels up between the packer roller and rear row of discs.

It might look a little unconventional but means that the weight of the wheels and folding system is applied to the disc harrow, rather than hanging off the back of the packer roller.

That should limit the amount the cultivator bounces in lighter soils, maintain a more consistent depth and improve penetration.

The heavy-duty roller is also used to turn on headlands, but this shouldn’t have any impact on bearing life, according to Pottinger.

A 5m version will require a 180hp tug, but the 6m is expected to the more popular folding Terradisc. The range starts with the 4m, which costs £31,995.