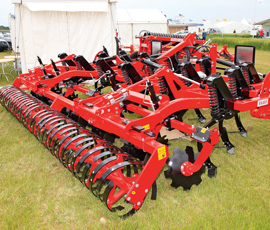 Another fresh face on the UK cultivations kit scene is Ilgi Tarim Makinalari – a Turkish company currently on the hunt for UK distributors.

The firm already sells machinery across eastern Europe and the Middle East and has a range of grassland kit as well as the tillage gear on show at Cereals.

About 2,000 machines are built each year in the maker’s factory in Aydin, west Turkey, including the Apollo 500 cultivator. It looks like a pretty well-made piece of kit, carrying three rows of wing-tipped tines, which should do a good job of mixing the soil. It also has a row of cutting discs and three roller options.

Auto-reset legs come as standard and, although the biggest machine on the stand was 5m, working widths actually extend up to 12m to suit some of the large-acre farmers in Ukraine and Russia.