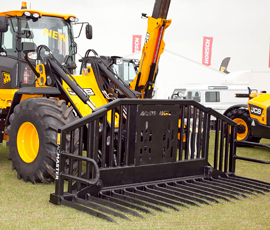 Cereals might seem like an unusual time to launch a big lifting shovel, but with May’s Scotgrass show cancelled JCB decided this week’s event was the place to showcase its new 435 shovel for the first time.

Directly replacing the market-leading 434, a DPF and EGR system have been tacked on to make the new model Stage 3b compliant. It’s powered by a 6.7-litre, 230hp Cummins unit, which, pumping out 949Nm of torque, makes it the ultimate big boys’ toy.

There’s a new transmission underneath, too. Though it’s still a six-speeder from ZF, there’s now selectable torque convertor lock-up in all the gears. That should mean more pushing power in the clamp and it’s also capable of 48kph on the road.

The size and shape of the shovel is the same, but the cab has also been refreshed. Noise has been cut to 70dBa, says JCB, and a new dash instrument cluster shows tractor-style data such as live fuel consumption.

Climate control is also optional and there’s a new low idle feature, which drags idle engine speed down to 700rpm from 950rpm once the shovel has been sat in neutral for more than 30 seconds.