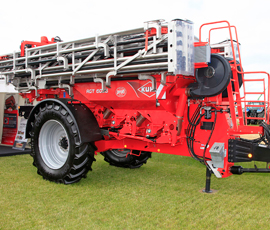 Kuhn’s 36m, 7t boom spreader is a goliath in the fertiliser spreading world.

Already a big-seller in Eastern Europe, Kuhn now expects the UK trailed market to grow as large-scale arable farmers go on the hunt for greater capacity and improved accuracy.

The AGT 6036 carries a 6,300-litre hopper and, according to the company, is capable of travelling at 15kph while spreading urea at a rate of 250kg/ha. That should help increase output and allow farmers and contractors to travel in less favourable conditions, too.

The 36m stainless steel boom is split into six sections, each fitted with five spreader plates. Individual hydraulically-powered metering units serve each boom section and have their own sensors to record roller speeds and make sure application rates are consistent across the entire boom width.

Boom height can be varied from 1.2-2m through a parallelogram linkage and there’s automatic hydraulic levelling to keep the boom steady. The unit is Isobus compatible and spreader functions – including the six-section shut-off – are controlled through an in-cab joystick.

Transport width and loading height are both 3m and the spreader will require at least a 150hp tractor on the front.