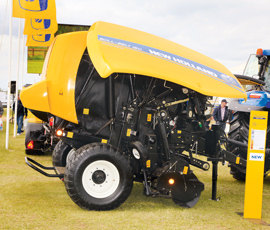 Last year’s Cereals event saw the launch of New Holland’s latest big square baler but this year it was the round version’s turn to get a spruce-up.

The two-model range – the Roll-belt 150 and 180 – replace the outgoing BR7060 and 7070 balers. The change has seen capacity increase by 20%, says New Holland, thanks to a new pick-up design. There’s the choice of 1.8m or 2m pick-up and it gets a roller wing guard with adjustable backplate for heavy conditions.

Caster wheels pivot out away from the pick-up and a reversing kit should help if you get blocked up, too.

The bale formation process is broadly the same as the BR range, but it now has four rather than six belts. These are individually made (so have no joining point), so should be more durable and stable around rollers.

The duckbill netting system also remains but the knife now has an upward cutting action, which New Holland says should be more controlled and longer lasting.

No prices have been set yet and the baler will be ready to order for 2014.