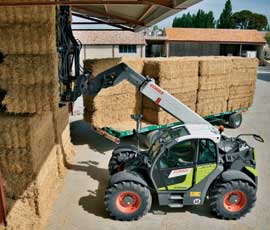 Claas is one of the first of the big-hitters to announce a series of new products and machinery updates ready for November’s monster Agritechnica show.

The Axion 800 – launched at the Sima show in France – will no doubt remain the Claas headline-maker this year, but an overdue redesign of the range of Scorpion telehandlers is also big news for the harvesting kit specialists.

It’s the first out-and-out overhaul of Claas’s telehandler range since it went into production in 2006. During its seven-year existence is has established itself as the number one telehandler on the German market and has also done well in fits and spurts in the UK.

The three high-capacity models will be in full production by this autumn, with three smaller-framed versions trailing early next year.

The driving factor in the redesign was upping capacity. European demand for 5t+ lift capacity has shot through the roof, with telehandler top dogs JCB and Manitou reporting good sales of their big 550-80 and MLT 840 loaders respectively.

The improvements in lifting capacity have been achieved by the low pivot point of the arm, says Claas, which sits deep in the chassis and flush with the frame at its lowest point. This should also help stability and improve the always-awkward view over the boom to the right.

Lifting, tilting and telescopic rams are now fitted with end-of-travel damping to reduce the bangs and bumps felt in the cab and there’s also a load stabiliser, which is automatically activated above 7kph to dampen vibrations.

The Scorpion has two hassle-saving automatic boom functions. The first – bucket mode – completes two operations at once, so dropping the arm once you’ve unloaded into a grain lorry will also retract it at the same time. For stacking boxes (the second mode) the forks will rise and drop in a vertical line.

For repetitive jobs there’s also a memory function on the joystick. Thwack the button and the bucket will return to its set position – ideal if you’re scraping out sheds.

Deutz is the engine maker of choice, providing the two biggest Scorpion’s with a 4.1-litre, 156hp four-pot. The smaller 7044 (and the three smaller models due next year) get a 3.6-litre with an output of 122hp. A particulate filter and DOC see to emissions nasties.

The Deutz power is directed through a three-speed hydrostatic transmission. Snail range goes from 0-7kph, Tortoise from 0-15kph and Hare from 0-40kph. The new models also come kitted out with a Smart Road function, which cuts engine rpm to 1,800rpm on the road to reduce thirst and bark on the asphalt.

Claas has also redesigned the bonnet to keep the engine area cucumber-cool during hot harvest work. Air is sucked in through the front and top of the bonnet, travels through the cooling system and heads out gills in the back of the bonnet near the rear wheel.

The biggest changes have happened in the cab. The redesigned A-pillar is now home to various dials including forward speed and engine temperature, as well as the load indicator.

The cab itself is 5% bigger and there’s extra storage at the back of the loader with ballast weights doubling up as natty lockable storage boxes ideal for ratchet straps and rope.Claas is one of the first of the big-hitters to announce a series of new products and machinery updates ready for November’s monster Agritechnica show.