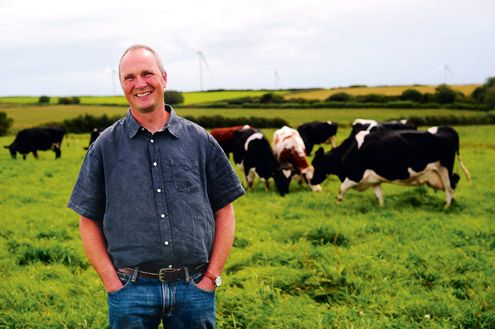 Rising costs has forced Devon dairy farmer Gavin Fowler to take control of at least one of his major input prices.

Mr Fowler, who farms 300 cows on his 202ha Higher Boode Farm in Branton, installed two 11kw wind turbines in 2010 in a bid to halve the energy costs of his parlour.

Three years later, Mr Fowler is reaping the benefits of the £100,000 investment, made using spare cash from the business and a small loan.

The turbines are producing an average of 35,000kW each, providing just over half of the energy needed to run the farm’s parlour.

Thanks to securing a higher early Feed-in Tariff rate of about 26p and selling the unused electricity back to the National Grid for 3.5p/unit, he expects the payback on investment to be just five years.

“Wind energy can be unpredictable, as wind can never be guaranteed, but my turbines have been very reliable, so I am very pleased with how much energy they have produced,” Mr Fowler says.

“I knew we were in a windy spot as we are on top of a hill, fairly close to the coast, and get predominantly south-westerly winds. But it can be hard to be scientific about these things, so it is often a shot in the dark about how well they’ll perform.”

Based on average wind speeds in his area, Mr Fowler decided on two 18m-high turbines – technology he had seen in action in Sweden.

“These turbines have a big blade, so they pick up slow, steady breezes,” he says. “It gave me the best chance of generating energy in my location and I knew from examples in Sweden that it was proven technology.”

In terms of planning, Mr Fowler admits he was very lucky, as permission had recently been granted for a large wind farm nearby.

“That had a huge amount of opposition in the area, but still managed to get through, so I thought I would have a go at the same time. I managed to put in an application and get it through under the radar.

“The biggest problem was the Ministry of Defence, who says their radars get confused by the presence of turbines, but luckily they changed their minds.”

Despite the potential opposition, Mr Fowler says wind power was always the first renewable energy option for him.

“I am able to produce power that’s reliable. If the wind is blowing at 5am I can use the power when I start milking, which wouldn’t be the case if I had solar panels and was waiting for the sun to come up.”

Given his experience, depending on the situation he would definitely recommend other farmers to make the investment, he adds.

“Turbines have gone up in price while the FiT has gone down, so investing in the technology now would mean a longer payback of eight years rather than five. But with energy prices continuing to go up, it’s worth it.

“I think it’s going to become more important for dairy farmers to look to find their own sources of energy.

“You can’t do much about milk and feed prices, but in the right situation energy prices can be controlled to some extent.”