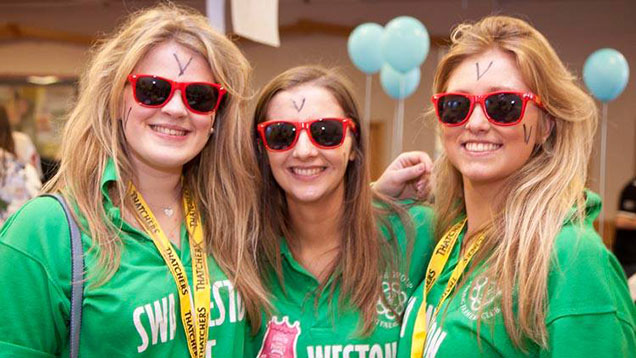 Thousands of Young Farmers have arrived in Torquay for the 2015 NFYFC Annual Convention.

The event will run from 24-26 April in the English Riviera.

Here are 10 photos that sum up the spirit of the first day.

We arrived with 1,200 pairs of Farmers Weekly sunglasses and left with none.

Spirits were high in the queues outside the Riviera Centre in Torquay.

These ladies in red from Cheshire YFC were the perfect models for our colour-matching sunglasses.

One Gloucestershire YFC member was keen to show us how farmers can be a resourceful bunch. He made these fetching sandals out of his old Dunlop wellies.

The Worcestershire YFC runners arriving in Torquay. The group of 20 ran 160 miles to the AGM from their county office in Hawford.

Our sunglasses were the must-have accessory during registration. Some felt that beach inflatables were a necessity too!

There were more club t-shirts than you could shake a stick at.

Cornwall YFC members went on a ‘Rugby World Cup’ cycling challenge from Twickenham to Torquay, pedaling past several rugby grounds along the way.

The banter began early this year with these lads from Nottingham YFC playing a sticky prank on their mate. We believe that these might be the first ever Tinder-themed club shirts.

You can see the rest of the photos in our gallery on FWispace.