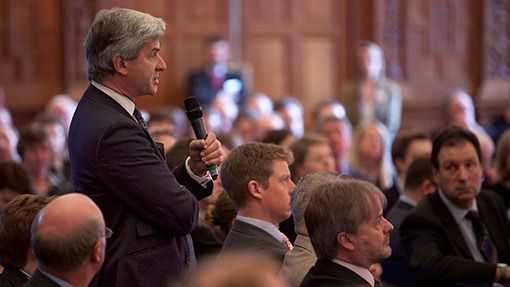 Two of mainstream farming’s fiercest critics have been invited to be speakers at the 2015 Oxford Farming Conference in a bid to challenge thinking about the industry.

The programme for the event, which runs from 6-8 January 2015, reveals that feedback from previous events had shown that people wanted to see the conference “move out of its comfort zone”.

For that reason, it has decided to present “alternative viewpoints of our industry” and allow delegates to challenge this thinking.

George Monbiot, a columnist for The Guardian and a famed critic of intensive farming, will speak on the final day of conference.

The invitation is controversial as last year he claimed sheep had reduced most of the uplands to “bowling greens with contours”.

Philip Lymbery, chief executive of Compassion in World Farming (CIWF), has also been invited to take part in the prestigious Oxford Union debate, which this year will argue the motion: “This house believe that intensive agriculture is no longer sustainable.”

CIWF has been one of the most vocal campaigners against large-scale farming – particularly in the dairy sector.