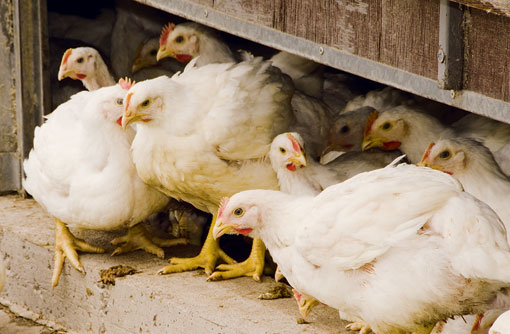 The RSPCA is changing the way it assesses broiler breeds under the Freedom Food scheme, but still believes fast growth rates are closely associated with welfare problems.

“Some time ago we introduced a growth rate maximum for birds that can be used under the Freedom Food scheme,” RSPCA head of farm animals Julia Wrathall told the recent Pig & Poultry Live event at Stoneleigh.

“This was because the body of scientific research indicated that, as growth rate increased, there was a concurrent increase in the number of key welfare problems. Selective breeding over many years, where the focus was on growth rate, has led to things like increased lameness, ascites and heart failure.”

However, working closely with the three main breeding companies, the RSPCA was now looking at “welfare outcomes”.

“We have agreed protocols and we’ve identified an independent assessment centre that will run trials where breeds will be compared under independent controlled conditions for the very first time,” said Ms Wrathall.

“We will therefore be amending our standards to take account of this approach and will be requiring that certain welfare indicators are met in order for a breed to be used under Freedom Food schemes.

But she added the proviso, that “we still believe at the moment that very fast growth rate is associated with greater challenges in rearing birds, even under excellent conditions”.

Poultry vet Stephen Lister said he believed some of Ms Wrathall’s claims were “slightly historic”. It was clear that both fast and slow growing breeds could be reared with high welfare, he said. “I’d say that leg health in broilers has never been better, while ascites is a rarity.”

Ms Wrathall was responding to a question from James Hook of hatchery business PD Hook as to whether it was really necessary to use slower growing breeds at a time when productivity was key to feeding a hungry world.