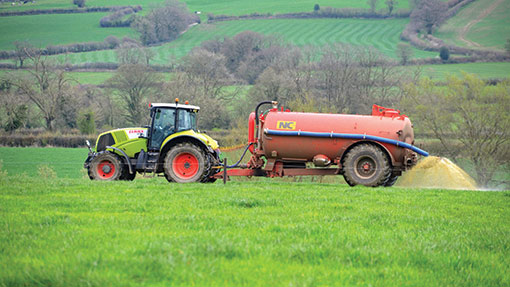 A leaflet warning farmers about the dangers of potentially fatal slurry gases has been published by the Farm Safety Partnership at Grassland and Muck 2014.

In recent years there have been a number of high profile accidents resulting in the death of both people and animals as a result of gases such as hydrogen sulphide.

The gas is released as slurry decomposes and even a few breaths can render a person unconscious.

The leaflet has been produced as part of the Stop! Think! Slurry Gas campaign.

It includes advice such as not relying on meters to measure gas levels as they can lead to a
false sense of security.

They also need to be maintained and calibrating, and they can warn you too late anyway.

Gas levels are unpredictable but levels normally rise as soon as mixing starts with the first 30 minutes being the most dangerous, it points out.

The level will generally fall as the mixing continues, but every time the pump is repositioned to mix
another part of the tank, the levels will rise again.

Guy Smith, NFU vice president, said: “Deaths from slurry gas still occur and these are made all the more tragic by the fact that so many people die who instinctively go to the aid of those in difficulty.

“This new leaflet has 11 points to follow to reduce the risk of a slurry gas incident.

“But it is equally important to know that if there is a problem, stop the pump, get the person to fresh air, but don’t put yourself at risk, call 999 and advise the emergency services that slurry gas may be present.”