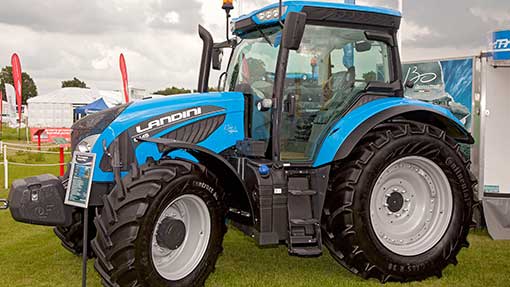 The past year has been a busy one for Landini/McCormick, with the Italians launching several new models, including a CVT flagship tractor and two blue-painted debutants at Grassland.

The first of those was the 6-series, which is made up of three four-pot, NEF-powered tractors rated to 131hp, 150hp and 160hp. The 4.5-litre engines also slurp AdBlue to appease the eco-warriors.

Standard transmissions come with 24 speeds in both directions, but you can add another 16 each way if you spec the creeper. A 50kph box is available from the options list, too, but standard fare is the 40kph set-up that is designed to run at lower revs once at top speed.

The rest of the tractor is higher spec than you might expect from a Landini. There are electrohydraulic controls for spools, diff-lock and four-wheel drive, which might put off long-in-the-tooth Landini buyers.

All the tractors have a 123-litres/min hydraulic pump, three spools as standard and a high-sounding rear lift of 9,300kg. Total tractor weight is 5,750kg.

The second of the Landini newbies was the 4-series, which replaces the Alpine tractors at the lower end of the horsepower range.

The models currently run from 85-107hp, although smaller models are due to be added to bring the basement power output down to 61hp. All have transmissions and four-post cabs designed and built by Landini, and there’s plenty of spec choice depending on its end use including mechanical- or power-shuttle.

Lift capacity on all the models is 3,900kg and there’s a high-flow hydraulic option that ups output to 57 litres/min for those doing front loader work.