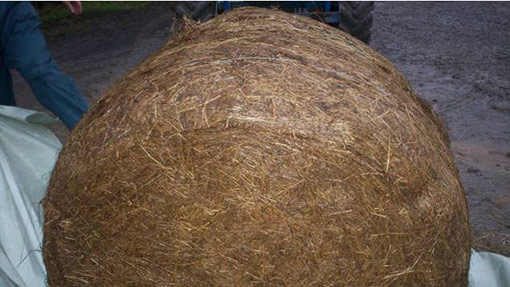 Using a “film-on-film” approach to bale wrapping could see farmers getting up to an extra 15 litres of milk from each bale of silage.

The yield boost is mainly due to the increased amount of feed through reduced wastage, says independent silage consultant Dave Davies.

The system developed by Silotite and making its debut at Grassland & Muck 2014, involves bales being wrapped with Baletite film instead of netting and then this is covered by the silage wrap.

It offers an extra barrier and it also squeezes more air out of the bale as unlike netting, it does not relax when ejected out of the baler, explained Mr Davies. “Netting can stretch by 1-1.5cm, drawing air in.

“It all comes down to oxygen. The quicker you get an oxygen-free environment and maintain this, the better the fermentation and less mould you get.”

The extra layer around the barrel of the bale also gives more protection. “The film sits against the wrap and even if you get damage to the wrap, air does not go in.”

On-farm trials looked at the resulting silage quality, bale losses and spoilage. Key benefits were less water loss and higher sugar and protein contents of bales compared with standard net-wrapped bales. “The higher sugar and lower ammonia levels point to a better preservation of sugars and protein,” he said.

There was also much less wastage because of mould with losses of 5.45kg for film on film, compared with 23.92kg for net-wrapped bales.

Mr Davies calculated that this extra silage combined with being more nutritious equated to 15 extra litres of milk.