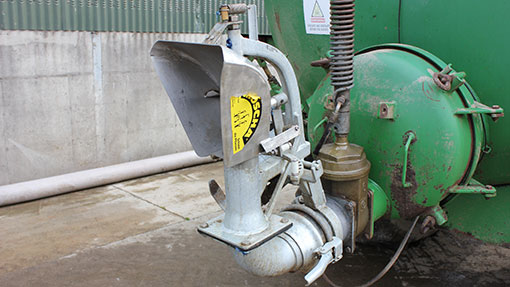 Displayed at the Irish grassland event rather than the British one, but this Moscha swivel spreader is aimed at farmers and contractors on both sides of the water.

It was designed by a German farmer who was seeking a better slurry-spreading technique a long time before splash-plate systems were banned in that country. The basic idea is that the nozzle slows down the speed at which slurry leaves the tanker, thereby creating larger slurry droplets.

These are said to retain the gases within the liquid more effectively than when slurry is spread with a higher-pressure conventional splash-plate system.

See also: Read all the news from Grassland & Muck

Slurry is said to leave the tanker at a speed of 29kph rather than the typical 42km/hour exit speed from a normal splash-plate. The swivel spreader oscillates as it spreads, giving a spread width of 12-18m.

The attachment can also be fitted as the spreader unit for an umbilical system. No extra power is required from the tractor and fitting it simply involves replacing a female/male coupling splashplate with the Moscha unit by clamping it on to the 120mm outlet pipe on the tanker.