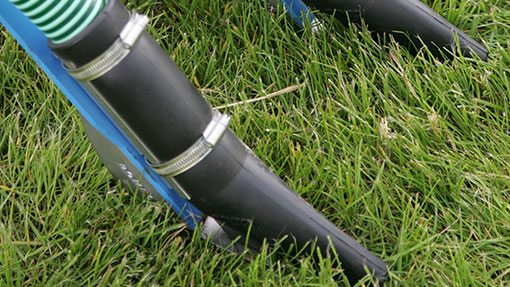 Replacing splash plates with a trailing shoe approach can double the number of slurry spreading days, which is valuable after a wet winter.

Last winter saw many full slurry stores and the wet spring also prevented farmers getting it onto land. One solution, according to ADAS Brian Chambers, is changing the method of applying slurry.

Splash plates are the simplest approach to applying slurry, but there are other techniques, which are primarily developed to reduce ammonia losses and odour. These include a trailing shoe or pipe behind a tanker, a trailing shoe umbilical system and shallow injection.

Of these, two are ideal for grassland applications, he told a seminar at Grassland & Muck 2014. Injection consists of placing slurry into a slit in the soil while the shoe deposits slurry on the soil surface underneath the grass.

“They both also give a clean crop as the slurry is below it. You can graze sooner after application and slurry can be applied closer to the silage cutting date.

“So not only do you improve nitrogen use by reducing ammonia losses, you also increase the number of spreading days.”

He pointed to two case studies. In the first, a farmer in Cheshire grazing, maize and cereals, switched to shallow injection and increased his spring/summer applications from 50% to 75% of total; the value of slurry rose from £18,000 to £30,000 through improved nutrient use.

A second dairy farmer in Worcestershire switched from using a splash plate to trailing shoe and saw a £1,000 increase in the fertiliser value of slurry nitrogen. Application costs were cost neutral, but the biggest benefit was a doubling of spreading days.

“The increase in spreading days is probably worth more than the nutrient benefit,” he said.