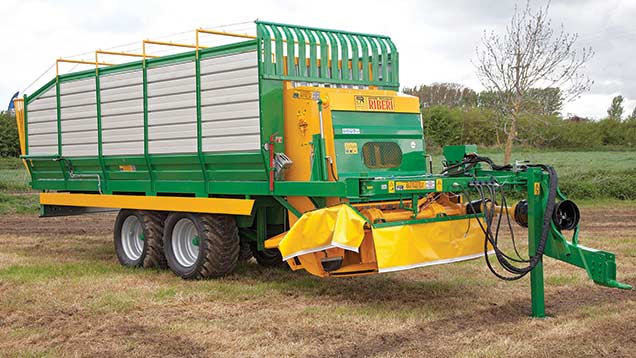 Irish firm Barnaboy Enterprises reckons zero-grazing systems could be set for something of a renaissance as robotic milkers continue their rise in the UK.

The system allows farmers to supply their cows with a source of fresh grass without sending them trekking out to forage for themselves.

It is also a cheap source of protein and, with milk prices continuing to struggle, can knock a healthy chunk off the feed bill.

The UK market is currently worth about 100 machines/year, but that is expected to rise as robots become more popular.

Barnaboy’s version is an Italian import from Ribieri – a company that solely builds zero-grazers. Its range starts at 20cu m capacity and extends to 48cu m, but it is the twin-axle 36cu m that is likely to be most popular.

It uses a 7ft cut, two-drum mower at the front. Unlike others on the market, Riberi uses a telescopic arm to form an A-frame, which reduces the strain on the single pivot and encourages the trailer to pull straight when it is offset from the tractor.

It will hold roughly 6t of grass, which means relatively small 550/45 R22.5 tyres should suffice underneath and power demands are a fairly modest 110hp.

Usefully, it needs just two double-acting spools with a diverter so there is no need to have a top-spec tractor.