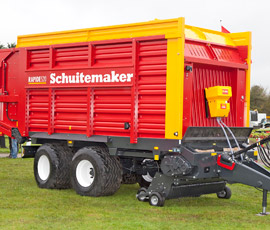 On the company’s stand was the smallest machine in the 100 series – the 520. At just under 8m from front to back, it’s one of the shortest precision-chop wagons on the market.

It has had a few updates since the original version was released in 2004. The latest gets a new, stronger 2m pick-up and 20mm tines, both of which are said to improve the feed of material into the wagon to reduce power requirements.

Unloading capacity has increased, too, with oil flow now up to 120 litres/min.

The wagons are sold through independent dealers and list price of the 520 is about £60,000.

For more from the show, see our dedicated page.