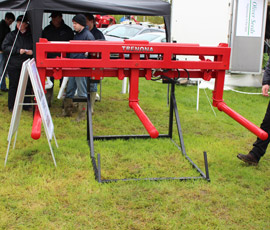 The two outside arms are hydraulically controlled, so can be used to either squeeze the wrapped bales or move apart to make spiking straw bales easier. Rollers fit over the spikes to make switching between the two as quick as possible.

The firm’s bag lifter was also on show. With adjustable wings to prevent swinging bags, the lifter can be used to move both 600kg and 1t bags.

Both the bale handler and bag lifter can have Euro, Matbro or Manitou hooks as standard, although others can be specified. The handler costs £2,850, while the lifter is priced at £695.