The Grassland & Muck event in Stoneleigh, Warwickshire, played host so some of the biggest and best muckspreaders and slurry tankers on the market.

Among the highlights punters got the opportunity to see at the two-day show (24-25 May) was the results of Joskin’s team up with John Deere – the X-Trem twin-axle tanker, GT Bunning’s 23t-capacity Widebody 230HD and Storth’s lighter-weight poly tanker. 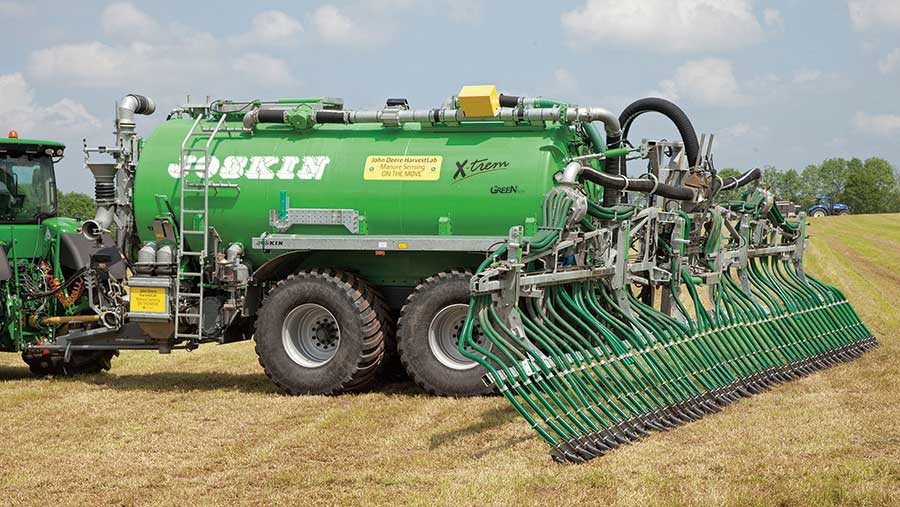 More accurate digestate and slurry application is the order of the day for an increasing number of UK farmers and contractors, as well as those in Europe who are under more stringent limits for quantities of material applied to fields.

With that in mind, Joskin was showing off the fruits of its collaboration with John Deere in the slurry demonstration area where it had an 18,500-litre X-Trem twin-axle tanker and dribble bar kitted out with Deere’s NIR sensing kit.

The slurry flows from the tanker, through the sensor and Joskin’s flow meter to the injector. During that process, the machine takes more than 4,000 readings every second and instantly adjusts the flow to the dribble bar.

Operators can pick minimum and maximum values of N, P and K, which sees the flow meter automatically adjust the quantity of nutrients going to the distributor to reduce application rates (and wastage) of mineral-rich slurry.

The sensor element is identical to the system used to monitor forage quality and you can get the bits required for the tanker from Joskin for about £4,000.

However, the Belgian firm doesn’t sell the Harvest Lab sensing kit – you have to buy that from Deere – but if you’ve already got one fitted to a forager then it’s a 20-minute job to move the box from one to the other.

But according to GT Bunning, sales of horizontal beater machines are gradually creeping up, particularly among contractors.

Now roughly 20% of the Norfolk maker’s new machines are sold with twin horizontal beaters and discs. The main selling points are the fact they offer more accurate spreading at lower application rates and can deal with a wider range of products.

The Widebody 230HD has a 23t capacity and is one of the biggest machines sold in the UK. This can spread up to 30m when using a double overwrap and can spreads anything from biosolids and solid

This can spread up to 30m when using a double overwrap and can spreads anything from biosolids and solid digestate, to farmyard manure and lime.

The 230HBD needs a minimum of 300hp on the front and requires two double-acting spools to control the hydraulic functions. 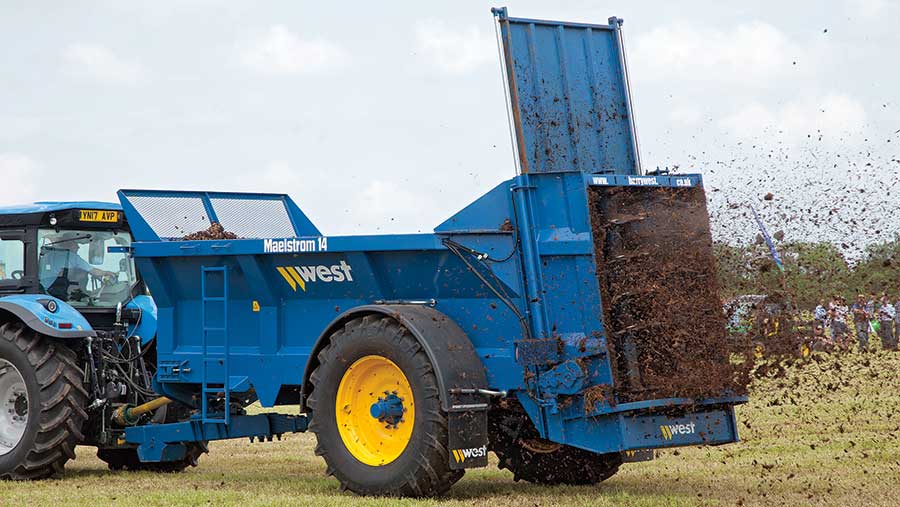 Harry West’s new Maelstrom 14 rear-discharge muckspreader was strutting its stuff in the muck arena, just a few months on from its debut at the Lamma show.

Upgrades include a new multi-leaf sprung drawbar, a move from chain-links to 14mm marine chains and LED lights. There’s also damage protection on the drivetrains and the company says the V-shaped profile of the body reduces the loading height.

Maximum capacity is 14cu m, which it will throw across a 12m working width, and optional kit also extends to a weighing system, GPS control and mudguards. 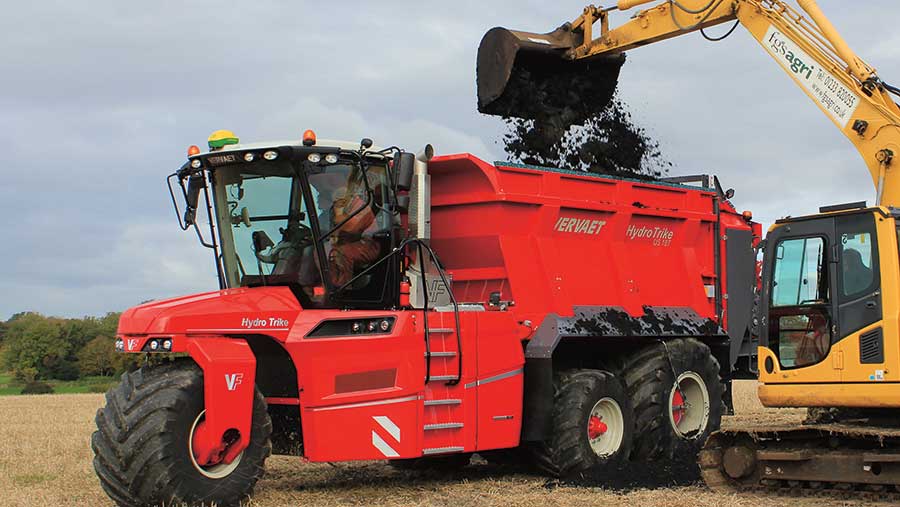 The Vervaet Hydro Trike in action

J Riley was showing off a brace of Hydro Trikes from Dutch firm Vervaet – one fitted with a muckspreader body and the other equipped for injecting slurry.

The latest models are powered by a 510hp DAF engine and have a hydro-mechanical transmission that tops out at 40kph.

Extending mid-axles take the width out to 4.5m during work to help spread some of the weight and improve stability across slopes.

The 18cu m Panien muckspreader body uses two heavy-duty floor traces driven from both sides, which can be reversed to clear blockages, while two beaters do the shredding and large-diameter discs spread to 24m.

There’s also the option of a 19,000-litre slurry tank with toolbar options including disc injectors and dribble bars for working in grassland and cultivator injectors for stubbles. 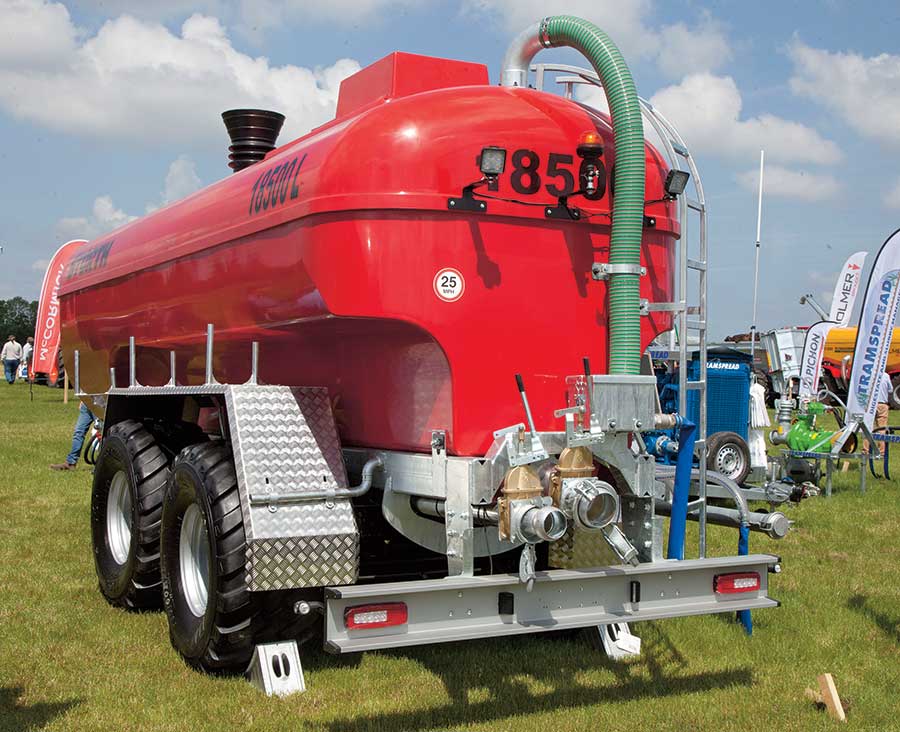 Demand from AD producers looking to move large amounts of digestate has prompted Storth to build a lighter-weight poly tanker.

The Osprey range was launched at the Lamma show in January and since then the Lancashire-based manufacturer has sold six machines.

All up, the 18,500-litre version weighs 7t empty, which is roughly 20% less than an equivalent steel vessel.

Storth builds the chassis of the machine in the UK, but German firm Polyglas constructs the tank using a special reinforced glass fibre. Unlike polyethylene, this is said to be unaffected by UV.

The tank has also been heavily reinforced, particularly in high-stress areas and has three internal baffles to stop the liquid slopping around.

Slurry or digestate can be loaded via the top-load port, or pumped in using a Vogelsang positive displacement pump. However, Storth says plans are afoot to develop its own pump.

To help keep steel-eating slurry at bay the entire chassis has been galvanised and the full-frame design means a rear linkage can also be fitted. 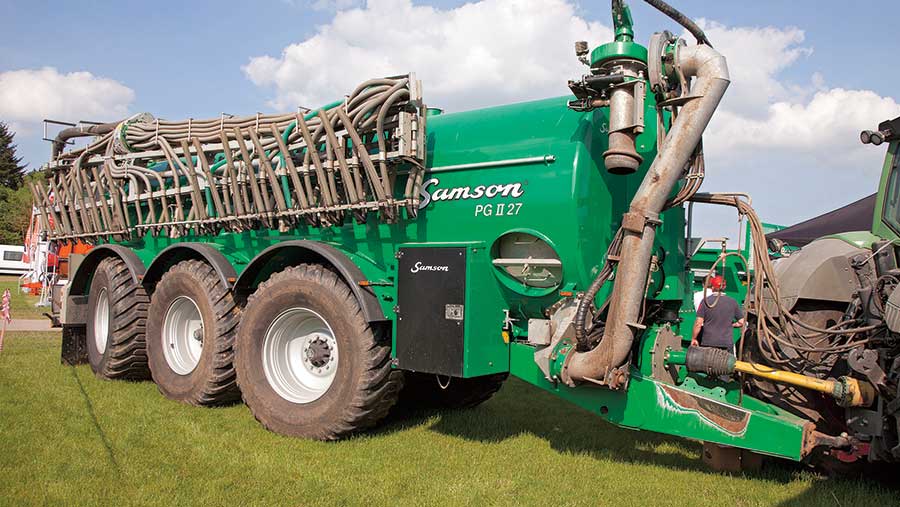 Danish manufacturer Samson is one of a number of foreign makers finding a growing market for its monster tankers.

The company says it has sold just shy of 20 tri-axle machines into the UK to various users all over the country, with its main customers coming from AD plants and large-scale contractors.

The most popular tanker is 25cu m tri-axle model although the twin-axle 20cu m units are also finding homes this side of the Channel.

A high capacity 7cu m filling system sucks the material in, while the boom has in-line macerator to take care of the larger lumps. 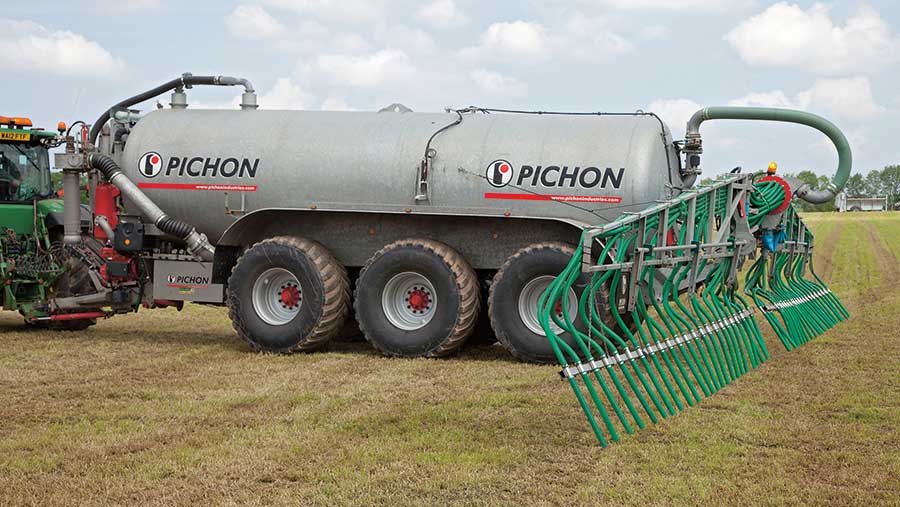 UK farmers are keen to maximise every pass and a rear three-point linkage with a 9t lift can drag a cultivator at the same time. The double steering axle is operated via a linkage attached to the tractor’s drawbar.

A 24m boom weighs 3.2t and, with a PG 27 tanker sitting at 11t unladen coupled with a minimum 310hp tractor on the front, the full rig can be easily pushing the 30t mark once loaded.

Elsewhere, Pichon tankers are easily identified by their galvanised livery and every machine is built to order.

There are a few Pichon tri-axles roaming UK soils and the company has identified it as a growing market, with its most popular model being a 24cu m tanker with 24m booms.

To be on the right side of the law, farmers are having to record exactly what they are spreading on the land with more accurate applications required – a move that has seen several Pichon customers trade in their conventional tanker slurry spreaders in favour of the larger boom set-up.

The biggest tankers come with weigh cells and tri-axle models have a hydraulic ram steering system. 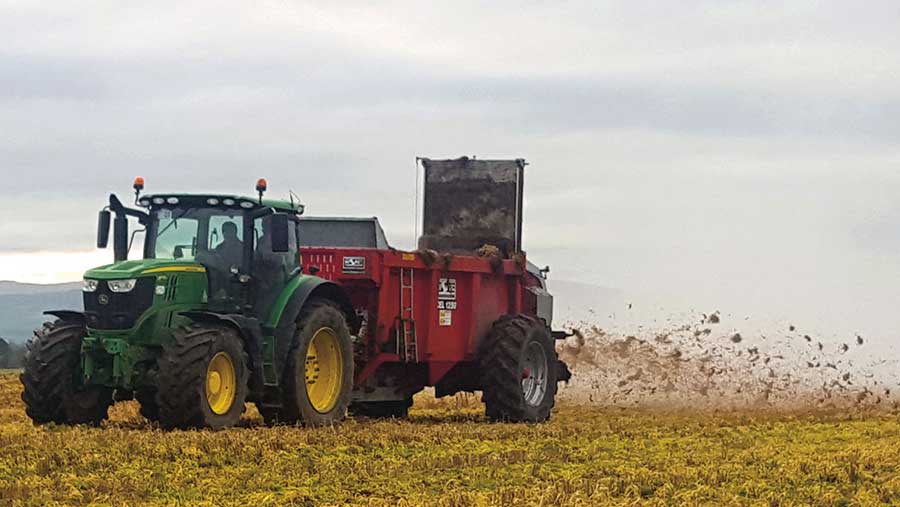 Strong sales of the new 1250 Xcel spreaders mean if you want to get your hands on one, you’ll have to wait until September.

The spreaders have the option of weigh cells for accurate material measuring, a sprung drawbar and Isobus compatibility.

Application rate is now controlled through an Apollo touchscreen terminal where it can be set and adjusted, and it also stores and records field records.

Spreading widths have been increased from 20m to 24m due to the faster Burma gearbox, the company says.