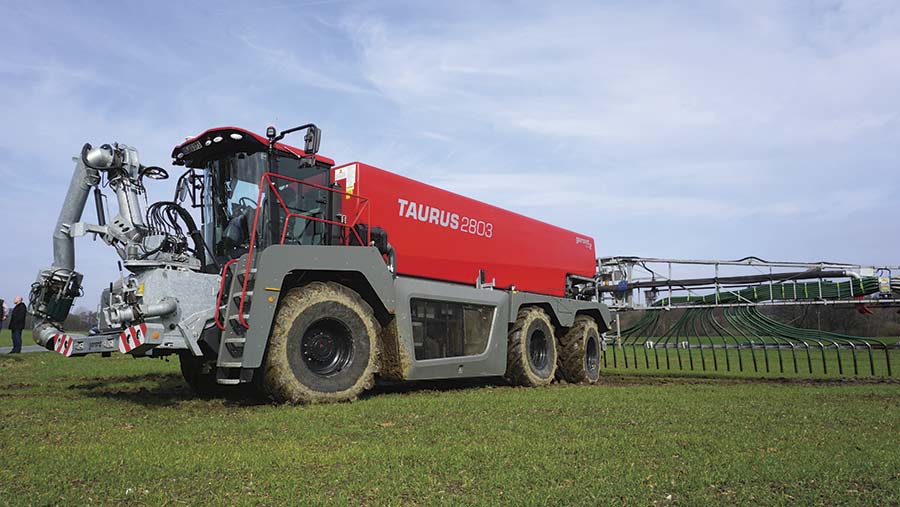 Kotte might be an alien name to most British farmers, but the German company has grand plans to unleash its high-capacity tankers onto UK soil.

The slurry specialist recently penned a deal with Gloucestershire dealer Continental Soil Technology, which imports kit from various companies including Bergmann and Krampe.

Its fleet of slurry kit tops out with the Taurus – a 650hp, six-wheel drive spreader built solely for big contractors shifting millions of tonnes of slurry and digestate.

Naturally, one of the biggest challenges with building such a large machine is the trade-off between weight, power and volume. Early prototypes used eight wheels but were deemed too expensive and complex.

Instead, the designers settled for a six-wheeled rig. Kotte’s expertise lies in the application technology rather than engines so it used fellow German firm Titan, which specialises in fire engines and other heavy-duty trucks, to help with the chassis and drive systems.

Down in the bowels is an Allison automatic gearbox offering 12 forward speeds and two in reverse, with a top speed of 40kph. The company says it opted for a mechanical transmission rather than hydrostatic to maintain decent performance on hills.

Standard footwear is 800/70 R32s, but buyers can spec anything up to R38s. Kotte claims the weight is spread pretty evenly across the six wheels – ground pressure is around the 1.2bar mark – despite the fully loaded weight tickling 58t, including the 30m boom.

Kotte uses a slim, long tank behind the Ropa-sourced cab, which means 30m applicator booms can be folded within the width limits for travelling on the road. The Börger EL 2250 pump will process up to 12,000 litres/min, so total fill time is around the two-and-a-half-minute mark.

Maximum capacity is 28cu m – considerably more than the Holmer TerraVariant’s 21cu m but a little way short of the Vredo VT700 at 32cu m, and even some trailed tankers.

However, the Taurus’ carrying capacity matches the 29t payload limit of German trucks, so one load equates roughly to one full tank. It also means there’s adequate grunt to pull a 12m Horsch Joker at 14kph with the discs working 10cm deep.

The company has so far built two machines, which are currently under evaluation. Outputs have averaged around 120cu m/hour and hit a peak of 180cu m/hour, using about 30-litres/hour of diesel with the disc harrow attached and 24-litre/hour running with the boom.

Kotte concentrates solely on slurry tankers and applicators – not even bothering with the competitive muckspreader market – and only builds 500 units each year.

In fact, the company is more of an assembler than a maker, buying in components from proven manufacturers and putting them together in a bespoke fashion for individual customers. Virtually every aspect of a machine can be specified, even down to the type and position of the docking arm.

This customisation is reflected in the average price of its machines, which is around €80,000 (£68,000). Interestingly, the company sees this trend only continuing, forecasting that it will sell fewer units in 2017 and 2018 but with an overall increase in revenue.

From cu m to kg/ha

Kotte is investing a lot of time and money in developing its own control software, which is just as important as the heavy metal.

The SmartControl Profi runs through an iPad app and produces detailed records for each field. The company is also moving away from applying digestate at fixed cu m/ha rates.

Variations in nutrient composition and in the amount of residual N, P, K in the soil can make for very uneven end results, so Kotte is looking to spread at rates of kg/ha.

The idea is to adjust this on the move. The company has already produced a mobile analysis station and is starting to fit in-line NIR sensors.

Likely legislation in Germany will limit the amount of nitrogren applied to fields – around 170kg/ha – which will fast-track sales of the equipment.

Kotte will make its UK debut at the Grassland and Muck show at Stoneleigh, Warwickshire, on 24 and 25 May.

The 190ac site will see working demonstrations of grassland kit, muckspreaders and slurry tankers, and gives visitors a great chance to compare machinery from all the big names.