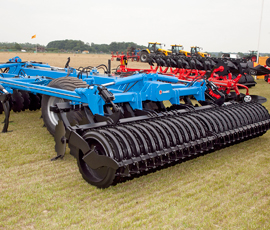 The Discordon has traditionally been one of Gregoire Besson’s biggest sellers, but the French firm now has another variation on the disc-tine-disc combination to add to its UK-sold tillage train line-up.

It is built by Rabe and is called the Carry Bret. It’s a lighter weight version of the Discordon and is available as a hydraulic folding 4, 5 or 6m unit (the 4m likely to be the most popular) folding to a pretty slender 2.5m for road transport.

A set of cutting discs lead two rows of shear bolt or auto-reset-protected heavy-duty tines spread 250mm apart. Another row of discs follow the tines before the rear roller tidies up the job.

There are three roller options for the back and, depending on the conditions, the Rabe can also be set to run with the rear packer off the ground and instead using the wheels to dictate working depth.