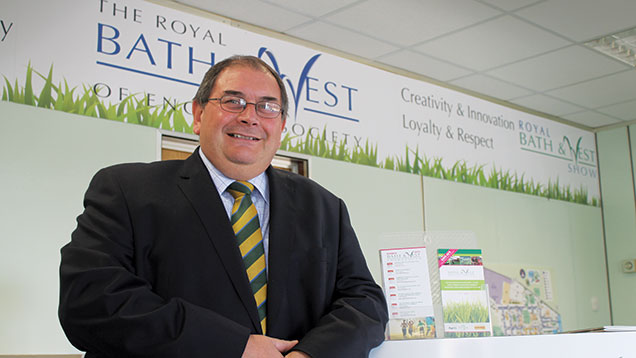 Many shows have fallen by the wayside in recent years. How do you balance the need to remain relevant to the farming community and to the wider public?

The role of agricultural societies, through their shows, is to be the showcase for the industry – as well as a networking opportunity for farmers.

There is both a social and a business side, but it’s really important not to underestimate the relationship with the paying public. Without them, you can’t show off the best agricultural and rural activities.

We have to learn lessons from shows that haven’t survived. We are running a business, and if more money goes out than comes in then we will fold. There is a perception that charities – which most agricultural societies are – shouldn’t be making big money, but it costs £1m to put on the Royal Bath & West Show.

We need to make money to invest for the future – that doesn’t mean putting up ticket prices, it means being more savvy about which sections make money and working closely with our sponsors.

Some shows have lost their lost their agricultural focus as they try to attract a wider audience. Is that true for the Bath & West?

Absolutely not – we have as much farming content as most other shows in the south of England. Agriculture is vitally important to the show – you can’t link a consumer to a producer who isn’t there.

We have 4,200 livestock, many national championships and a growing machinery section. Being the largest showground in the country, and holding the show during half-term, not only do we attract farmers with their families, but tens of thousands of the general public (our consumers), which gives the false impression that there aren’t so many farmers around.

I think we need to segment the show a bit more to make it easier for people to find what they’re looking for. This year we’re putting in a farmers’ bar in the shearing marquee to give a natural meeting point and next year we are going to change the layout because at the moment our visitors’ first impression really depends on which entrance they use.

With the success of specialist farming shows, is there still a need for the main country shows?

You could argue that the specialist shows dilute the importance of the main shows, and we have to be mindful of that. But they serve different uses.

The main shows have something for everyone – farmers and consumers alike – whereas specialist shows are tailor-made for a focused audience. They both have their place: the main show is part of what we do, not all of what we do.

One of the first aims of agricultural societies, back in the mid-18th Century, was to encourage agriculture, arts, manufacture and commerce. And in a way, little has changed.

Over the years, most regional societies launched travelling shows to spread their knowledge, and, as farmer numbers declined in the 19th century, shifted their focus to include the education of the general public. And we are still doing that.

Rupert Cox in a minute

Tell us something not many people know about you

Between the ages of 16 and 18 I was the youngest church verger in the Church of England. I earned £1 a week at Long Sutton village church – and I did it for the money. I earned more for weddings, funerals and christenings, and the vicar let me off evensongs in the summer so I could play cricket.

What are your favourite hobbies and sports?

I still play a bit of cricket. I’m a member of Rotary International and through that I represented Great Britain and Ireland playing cricket in India and South Africa. I’m not great at relaxing – I can’t remember the last book I read, but I can watch TV and I enjoy my garden, house and socialising.

Butch Cassidy and the Sundance Kid: ‘Raindrops Keep Falling on my Head’ – I love it.

How else do agricultural societies benefit farmers, if not through their shows?

My vision is to place the society at the hub of rural influence in our area. It’s important that societies take strong leadership in rural affairs – there is more we can do at a strategic level. We’re already doing that in the form of our help with the Somerset Levels Development Fund, which has switched from helping farmers affected by flooding in 2013 to longer-term water management planning. But we need to do more.

For us, as a charity, there’s a very clear aim to bring the consumer closer to the producer, and for them both to understand the other better. The show is a catalyst for that. But it’s also about education of the farming and rural community. We offer grants and bursaries for young people, and work with other organisations to avoid duplication.

I have an ambition to create an agri-tech innovation centre here on the site, which we can use to educate youngsters, and boost knowledge transfer to farmers, including more effective production and routes to market. By linking with higher education providers, vets and other experts, we can help farmers find solutions to the problems the industry faces.

I’d also like to build a commercial kitchen to help small food producers to scale up, and provide a hub through which other organisations can help them with problems such as marketing, access to finance and regulatory challenges.

Are permanent showgrounds an asset or a liability?

Both, really. There are four elements to my work – our shows, our charitable work, other events held here, and development of the showground. The main show doesn’t make enough money, so we need the other strands to sustain the society.

We have a programme in place including 80 acres [32ha] of commercial development, which will realise capital to improve our showground facilities. We’ve got an application in for permission to create a school for autistic children, and are working with a number of other enquiries at quite a detailed level.

What are the biggest challenges and opportunities facing agricultural societies?

The biggest challenge is developing shows that are steeped in history and heritage into contemporary attractions that are relevant to the 21st century. Culturally, that’s a big challenge. But the opportunity is there to re-ignite the consumers’ passion for food and rural activities.

After nearly 20 years of major retailers dictating what people think, the public mindset is changing – they want to know where their food comes from and we have the opportunity to trumpet that.

Next year we’re going to be introducing more street food and artisan food to the Bath & West Show, to eat here or take away, and use more commentary and razzmatazz to bring the farming exhibitions to life.

What about the challenges and opportunities facing the wider farming sector?

They’re not dissimilar to the ones I’ve already mentioned. But on top of that, farming families need to really invest in the future rather than continuing to do what they’ve always done. It can be hard with two or three generations still involved, but they have to allow the younger generation to adopt new technology and farm more effectively.

We are increasingly trading in a global market, so farmers need to explore what it means to be producing as an international business rather than a village business. They need to recognise what’s in their control and make the most it.

You come from a farming background – how important is that for your role?

It makes my job more straightforward because I understand our key stakeholders and the challenges they’re facing. Farming is quite a complex business so that knowledge really helps.

Although I farmed beef and sheep on the Somerset Levels until I was nearly 40, I felt there wasn’t a long-term future in it for my own family, so I took a career change. I moved into business support including working with the Federation of Small Businesses.