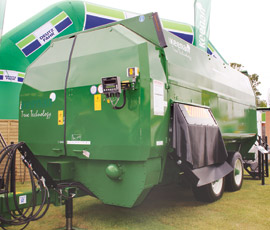 There was also diet feeder news from Keenan, in the form of the firm’s new Mech-fiber 380.

With a 9t payload it is said to suit dairy herds of 150 cows or fattening units of up to 350 head. Although it takes its design cues from the larger MF 400, the 380’s chassis and body mean it is as manoeuvrable as the smaller MF 360, according to the Irish manufacturer.

Body design has been improved to remove the pinch point that can be created after the top knife, while the discharge has been reshaped to mean it adds only 25mm (1in)to overall machine width.