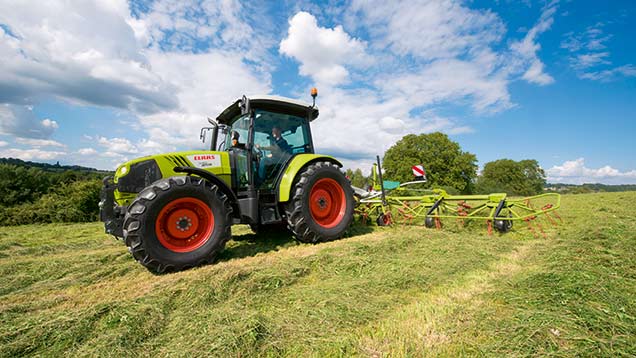 Two new small tractor ranges emphasising a wide choice of features and specifications on 20 distinct models between 70hp and 140hp will be shown by Claas on its stand at the Lamma show.

The newly revealed 76-109hp Atos 200 and Atos 300 tractors have a choice of synchro and power-shuttle transmissions ranging from a simple 10×10 mechanical configuration to a 30×30 unit with triple powershift; two- or four-wheel drive; and two-speed or four-speed pto.

See also: Six of the most interesting tractors at the Eima Show

Smart Stop adds the ability to bring the tractor to a halt and start off again using only the accelerator and brake pedals.

A highlight for loader users is the Panoramic option – an uninterrupted windscreen and roof window that provides an unprecedented view forwards and upwards.