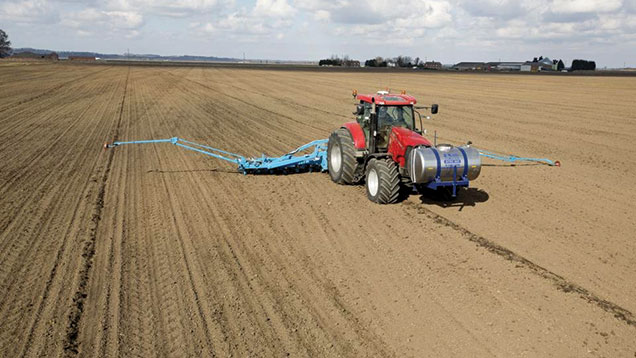 One of the great things about Lamma is that every year new names and faces pop up, seemingly out of nowhere. Nick Fone talked to some of the companies that have appeared on the scene in the past couple of years.

Six years ago sprayer specialist Simon Kitchen set up on his own, servicing and repairing machines in his corner of east Lincolnshire. He was certainly qualified for the job, having worked at both Gem’s and Househam’s sprayer factories.

Initially he concentrated on what he knew best – conventional spray rigs for field crops. But a couple of niche opportunities soon presented themselves.

Given the abundance of vegetable growers in the region, there was a particular need for someone specialising in liquid fertiliser rigs for potato planters. Mr Kitchen quickly got a name for himself as the man to go to for these tailor-made set-ups.

At the same time another niche was developing in the amenity market. S&K Sprayer Services was asked to design and build a number of small spray packs for mounting on utility buggies and compact tractors for use on golf courses and sports pitches.

But it was the development of a one-off shrouded boom sprayer on the back of a power harrow that sparked a new area of interest for the fledgling company. Shortly after it was built, the company got orders from Romania for two shrouded pre-emergence herbicide sprayers to be fitted to seed drills.

That prompted Mr Kitchen to think about the increasing issues with grassweed control in conventional arable rotations in the UK and the opportunity for an altogether different type of shrouded sprayer.

Having been approached by a local farmer to see if he could produce a machine capable of applying two different types of herbicide to growing crops planted in rows, he set about designing a rig that would do just that.

At Cereals last year the Smart Spray made its first appearance. With individually shrouded nozzles to apply glyphosate between the rows and narrow-band fan-jets to spray a selective product on the crop row, it proved itself adept at controlling problem weeds in oilseed rape, sugar beet and maize.

Obviously, this requires two different products to be carried in separate tanks so there’s a 1,200-litre compartment for the overrow liquid, an 800-litre one for the inter-row chemical and a 200-litre clean water tank – all contained in one stainless-steel front-mounted unit.

With an ultra-precise RTK-guided tractor, working speeds of up to 14kph are possible, although the prototype rig did require a stiffer double-box section toolbar for those speeds. With the individual units carried on parallelogram linkages and mini-cleated tyres, accumulator-cushioned hydraulics smooth the ride. With each nozzle switched automatically, the price for the 18-row machine is £70,000.

Next step? To develop a GPS-controlled side-shift toolbar to further increase the Smart Spray’s accuracy and allow even faster work rates, says Mr Kitchen. A small version of the unit will be on show at Lamma alongside S&K’s liquid fertiliser rigs and Avadex granule applicators.

Twenty-two years ago, Devon contractor Eddie Staines found he couldn’t quite find the right specification silage trailer to meet all his needs – so he built his own.

Fitted with commercial axles – which was unusual at the time – his farm-fabricated rigs had plenty of stopping power. There was also a strong emphasis on making the trailers stable to suit the region’s rolling countryside.

Neighbours started asking Mr Staines to build bespoke trailers to their specific specifications and the order book grew to the point where the business now turns out 80-100 units/year.

While it was originally silage trailers that formed the foundation for the business, it’s now plant low-loaders and bale/box flat-beds that make up the lion’s share of the small workshop’s output.

Running gear is all commercial spec and there’s a choice of refurbished or new high-speed axles. Most are kitted out with load-sensing air brakes and some with air suspension – a sign that operators are wanting to run heavier, faster and safer while staying within the law, according to the firm.

Staines Trailers made its first appearance at Lamma in 2013 and at this year’s show will have new developments on display. The company has also teamed up with Yorkshire firm Plowman Bros, which now supplies aluminium livestock bodies to fit Staines flatbeds. The Devon firm has another joint venture building and selling Aerworx heavy drum pasture aerators.

Both products will be on the stand alongside a new slurry tanker range and the clever Bale Pack flat-bed, which has paralleogram frames that raise and lower hydraulically to clamp loads of bales, bags or boxes in place without the need for straps.

When the Yorkshire farm where tractor-driver Gavin Cater works switched from conventional cultivations to a strip-till approach, there was suddenly a whole lot less autumn work to do.

Not a man for putting his feet up and twiddling his thumbs, he decided he could fill his new-found spare time building and selling something he had invented several years previously.

Effectively a front linkage-mounted weight-block and toolbox combined, it’s a simple concept that has caught plenty of people’s attention. The centre section contains a 600kg, 800kg or 1,000kg removable weight with pallet-fork sleeves and a lockable lid with gas-strut supports while the outer two lockers serve as tool storage.

Key benefit of the lift-in, lift-out weight is that when it is not required, its compartment can be filled with other useful goodies such as bale-wrap, string and even a 200-litre slot-in diesel/AdBlue tank.

Things have moved swiftly since last year’s Lamma show, with orders coming in at a decent rate. Originally all the steelwork was cut by hand with an angle-grinder; now it is laser-profiled by a local firm but is still stitched together by Mr Cater with a MIG welder in the workshop.

That helps to cut build time by two-thirds and smartens up the whole unit’s appearance.

At this year’s show Gavin and his wife Julie will have a more basic fixed concrete-block version of the Smartbox on their stand and a smaller unit for medium-sized tractors.

Years spent sitting on a tractor applying slurry through an umbilical rig led Devon tractor driver and fabricator Phil Blake to develop the Slurry Spike. Convinced there was a better way to apply high volumes of liquid muck at decent work rates, he set about designing his own aerator-injector.

Having had plenty of experience with dribble-bars, trailing shoe set-ups and disc injectors he felt the overall concept could be simplified to do away with the need for a macerator and narrow, blockage-prone pipework.

He decided that the only way to achieve that was to use 100mm (4in) pipes all the way to the slurry outlets. But such big bore lines presented a challenge for precision applications. That was when Mr Blake fell upon the idea of taking the spike aerator concept and using the axle as the delivery channel for the liquid.

Fixed in place, this inner tube has a groove cut along its underside while the outer sleeve has spikes along its length with circular outlets drilled into it so that when they align with the groove a measured shot of slurry is dispensed into the slot created in the ground.

As the outer sleeve rotates, the outlet holes generate a shearing effect against the groove to deal with any fibrous material and avoid blockages. The whole unit is lubricated by the slurry itself, doing away with the need for bearings.

Mr Blake’s first version got attention from mainstream machinery manufacturers when it appeared in the Farmers Weekly inventions competition in August 2009. But it never quite made it through to production so 18 months ago he decided to build a 6m folding version to go on display at Lamma 2014.

It generated a lot of interest and a number of units have since been sold for use both in umbilical set-ups and on the back of tankers. It will again be on show at the event this year.

David Carbis is something of a serial inventor. He has always been drawn to the workshop and welder to solve everyday stockmen’s problems on the family’s beef and arable farm near Truro, Cornwall.

Concerned about the safety issues of using a tractor-mounted post-knocker, 10 years ago he built a fully automated version carried on a fore-end loader that can be operated by one man from the tractor seat.

Not only does it hold a stack of posts, automatically feeding them out one-by-one, positioning and clamping them before knocking them in, it also unrolls and tensions stock-net and wire. It was such a clever idea that it won the Farmers Weekly Inventions competition.

The next machine to be born in Trenona Farm’s workshop was another loader attachment (it’s a continuing theme).

Designed to make the most of larger loaders’ handling capacity and speed up field clearance and wrapping, the BaleSwift bale handler is essentially a wider version of a conventional squeezer. However it has three hydraulically operated bars enabling it to deal with two wrapped bales of silage at once.

These bars can then be removed to expose three spikes allowing up to five bales of straw to be shifted at once – three on the bottom row and two on top. The bars can also be swapped for paddles to allow the unit to handle square bales as well.

But all this glitz and glamour didn’t go to his head – he had more clever ideas up his sleeve. The next was a much more simple loader attachment.

Wanting to improve visibility when unloading fertiliser and avoid the risk of damaging curtain-siders with limited headroom for pallet-forks, Mr Carbis built a simple hook frame that enabled him to clearly see bag loops from the tractor cab.

He added bars either side, limiting the amount bags can sway to improve stability and avoid those hair-raising moments as one rear wheel lifts off the deck when dashing from the wagon to the shed.

Trenona bale and bag attachments are sold through Amia UK and will be on the company’s stand at the Lamma show in a couple of weeks’ time.