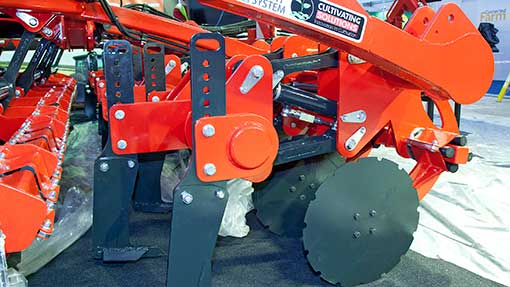 It has begun offering Soyl’s GPS-reliant depth controller on its implements, which varies the working depth of deep-loosening legs on its Titan cultivator and Rapidlift drill.

The system usually relies on soil compaction maps produced using a penetrometer to record conditions across different points dotted across the field. Soil types and compaction levels can vary significantly and it would otherwise be near-impossible for the tractor driver to know exactly where to raise and lower the implement on the back.

Instead, as the GPS-enabled tractor drives across the field, the information from soil maps will automatically lower the cultivator in areas of high compaction and raise it in areas that are less troublesome.

The technology could also be used to apply a basic controlled traffic farming concept – cultivating the wheel tracks of a GPS-guided combine deeper than the rest of the field will improve soil structure where necessary, but could also reduce fuel use across the less compacted parts of the field.

The company also took the chance to reveal a new polyurethane scraper to keep soil clear of the Titan’s packer roller. The Titan is already available with a powered rear packer, and the new star-shaped scraper is driven off another of the tractor’s hydraulic services.

The rest of the machine remains the same, with low-disturbance subsoil legs and shallow working discs up front. The major appeal of the Titan is its low power requirements – Cultivating Solutions reckons a 6m Titan can be pulled by a 210hp tractor provided the conditions are good.

Further tests by the company seem to back this up – the Titan will need about 60hp/metre of machine, while rival implements might hog up to 90hp/metre.